Pharmaceutical failures have raised doubts about the role of beta-amyloid plaque in Alzheimer's disease. 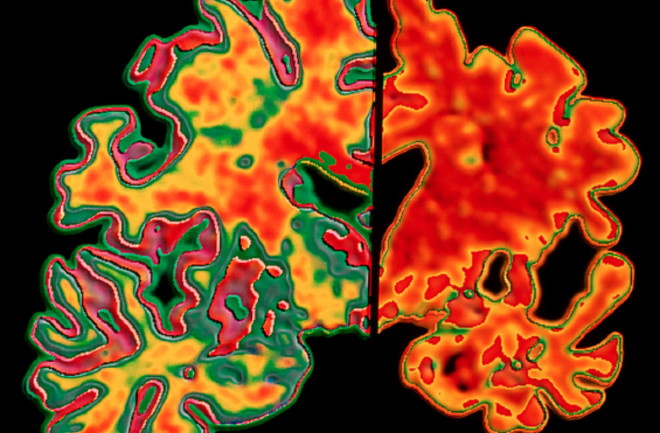 Brain slices from two individuals, one healthy (left) and the other with Alzheimer’s (right), reveal the devastating changes wrought by the disease, including nerve cell death and decreased volume. A. Pakieka/SCIENCE SOURCE

Roughly 5.7 million Americans live with Alzheimer’s, the neurodegenerative disease that slowly deteriorates memory and other cognitive abilities. For more than 25 years, many experts have pushed beta-amyloid, a protein fragment that builds up in the brain in plaques, as one of the main suspects behind the disease. Pharmaceutical companies are chasing beta-amyloid hard, racing to develop drugs to fight plaque buildup and hopefully, in turn, improve patients’ brain function. But 2018 was a mixed bag for those potential treatments.

Several companies have been developing products to inhibit BACE1, an enzyme critical to the production of beta-amyloid. But clinical trials for three of these BACE1 inhibitors ended with not-so-promising results. One was yanked for safety concerns after patients developed liver problems. Another ended early after participants had adverse effects such as trouble sleeping and suicidal thoughts, as well as no improvement in symptoms, despite lower beta-amyloid levels. The third trial finished and will move on to its next phase — even though it also showed a drop in beta-amyloid levels without significant improvement in participants’ symptoms.

Companies testing another type of pharmaceutical — antibodies that break down amyloid rather than prevent its production — checked in with more mixed results. One company reported that its antibody reduced plaque buildup at all dosage levels; at the highest levels, it also alleviated cognitive symptoms. Another group, though, decided to expand their trial before its scheduled end date to involve more people when the antibody wasn’t testing as well as hoped.

Nearly all of these results underscore a crucial question: Is beta-amyloid the real boogeyman behind Alzheimer’s? Big Pharma seems to have put all of its eggs in this basket with hardly any payoff. Most of the drugs are failing, and the one that did report positive results only overcame the real hurdle — an improvement in cognitive function — in people who got the highest dose, despite amyloid levels dropping for all participants. The confusing outcome has many experts concerned about what this means for amyloid’s role in Alzheimer’s. If drug companies continue hitting dead ends, soon they’ll have to more seriously consider other culprits, such as tau, another protein that builds up in Alzheimer’s-riddled brains.

Treatment Trials and Tribulations in 2018:

February: Merck stops Phase 3 trial on BACE1 inhibitor verubecestat. The move comes a year after an earlier trial in which patients showed lowered beta-amyloid levels, but with adverse effects and no improvement in brain function. Biogen tweaks design of its trial for the antibody drug aducanumab.

May: Janssen shuts down its trial of BACE1 inhibitor atabecestat because of safety concerns.

June: Biogen and Eisai reveal that their BACE1 inhibitor elenbecestat lowers beta-amyloid levels, but they can’t claim the drug boosted people’s cognitive function any better than a placebo.