In a paper just published, a group of neuroscientists report that they've changed their minds about how the brain processes social pain. Here's the paper: Separate neural representations for physical pain and social rejection The authors are Choong-Wan Woo and colleagues of the University of Colorado, Boulder. Woo et al. say that, based on a new analysis of fMRI brain scanning data, they've found evidence inconsistent with the popular theory that the brain responds to the 'pain' of social rejection using the same circuitry that encodes physical pain. Rather, it seems that although the two kinds of pain do engage broadly the same areas, they do so in very different ways. Interestingly, three years ago this same group of researchers argued that social pain and physical pain are processed in the same way by the brain. That was back in 2011 with their highly-cited paper in

. Woo didn't contribute to that paper, but both the old first author, Kross, and the old senior author, Wager, are authors on the new paper. In fact, the new paper is more or less just a reanalysis of the same fMRI data from the 2011 article, but using different statistical techniques. Here's how Woo et al. describe their new approach:

The image below shows the key finding: while both physical pain and rejection activated the same brain areas (S2, dACC etc.), Woo et al. report that the two kinds of stimuli evoke different patterns of activity within those areas. 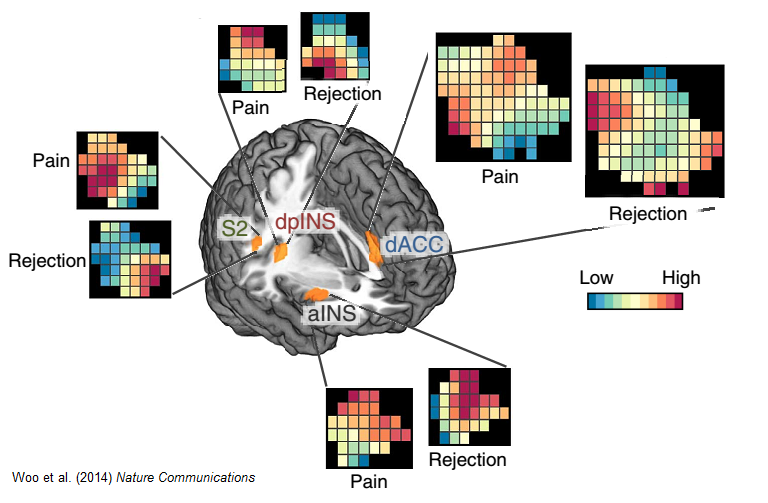 The authors further show that these different patterns of activity are each associated with an entirely different pattern of connectivity across other brain areas, which I think helps to counter a potential concern about the interpretation of MVPA. As we've seen, this is all a bit of a volte face. The authors discuss their previous claims as follows:

Woo et al. have shown commendable scientific integrity in being willing to change their minds and update their theory based on new evidence. That sets an excellent example for researchers. But perhaps we should now also credit those who anticipated this: such as the Neurocritic blog in 2012:

Social Pain and Physical Pain Are Not Interchangeable ... Your anterior insula and anterior cingulate cortex might be very busy in both cases, but they're also activated in many different situations (Yarkoni et al., 2011) ... Sure, the affective components of pain might show some overlap with physical pain (Kross et al., 2011), but distinct networks are likely responsible for the unique aspects of these different qualia.