A study claiming that a "memory" could be transferred from one animal to another in form of an injection has caused a lot of excitement. The Futurist said that Scientists Transferred Memories From One Snail to Another. Someday, They Could Do The Same in Humans. But I have to say I'm not convinced. In the paper, published in eNeuro, UCLA researchers Alexis Bédécarrats and collagues report that they extracted RNA from the neurons of sea slugs (Aplysia) after training them to be sensitive to touch. This RNA, when injected into untrained Aplysia, caused them to become sensitized to touch as well, as this key figure shows: 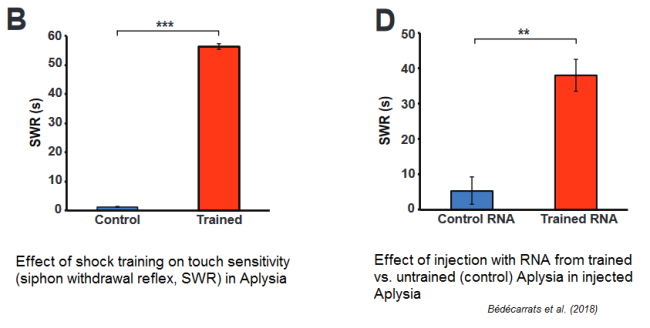 The authors hypothesize that the RNA may have induced epigenetic changes in the neurons of the recipient animals which caused the sensitization. This would be a radically different mechanism of memory to the one accepted by most neuroscientists, which is based on the specific pattern of synaptic connections between cells, and which could never be injected.

The discovery that RNA from trained animals can transfer the engram for long-term sensitization in Aplysia offers dramatic support for the idea that memory can be stored nonsynaptically, and indicates the limitations of the synaptic plasticity model of long-term memory storage. In addition, our results suggest that RNA could eventually be used to modify, either enhance or depress, memories.

There's a couple of reasons why I don't think this is evidence of "memory transfer". Firstly, what was transferred here was hardly a memory in the usual sense of the word. It is simply an increase in the sensitivity of a set of neurons, a single reflex pathway. This 'memory' is not specific to any particular stimulus. The training consisted of shocking the animals, which makes them more likely to withdraw in response to touch - not to shock, but any touch. It's just "turning up the dial" on that reflex. It is hard to see how this relates to the far more complex types of memory in humans. Secondly, the claimed transfer by RNA injection seems biologically implausible. This isn't my field, but as far as I know from molecular biology, you can't just inject RNA into an animal's bloodstream (or haemocoel in this case) and expect it to enter cells. 'Naked' RNA (or DNA) is a large molecule and large molecules don't cross membranes without help, as I understand it. Now, Bédécarrats et al. do discuss this point, citing evidence that 'naked' RNA can become encapsulated inside packages called exosomes and that this could allow them to enter cells. However, the authors don't show any evidence that this would be possible with the kind of RNA that they injected, or indeed that their RNA did enter the cells at all. Direct evidence of this would make the whole thing more believable. Admittedly, I think RNA injections transfering memory is slightly more plausible than the famous 1960's paper claiming that worms could ingest memories by eating other worms - although that cannibalistic mind-meld was supposedly based on RNA as well. Overall, like the previous paper from this lab that I covered, I think this is interesting work that deserves further research, but I'm far from being convinced that we need to rethink conventional theories of memory. Not yet anyway.