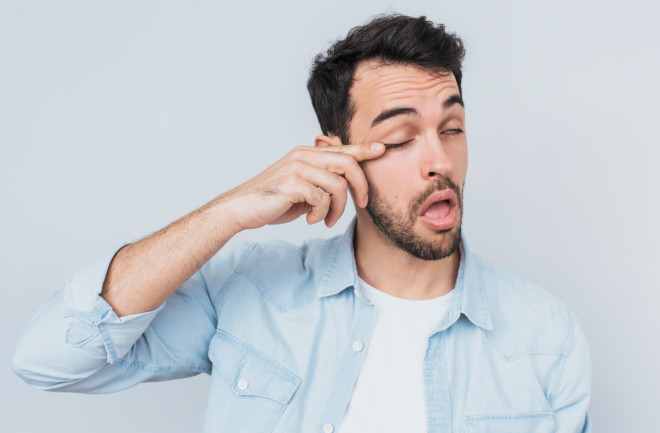 (Credit: Yuricazac/Shutterstock) Sleep deprivation strikes us all at some point in our lives, from stressed-out students struggling through finals week to parents of a newborn barely catching a wink. They’re all running on empty. And if you happen to interact with one of these poor souls, you’ll likely notice they may seem a bit distant. If so, you may feel a little bummed yourself once you part ways. You’re not imagining things, at least according to new research in Nature Communications. Respect the Bubble The study, conducted by Eti Ben Simon and Matthew Walker, both sleep scientists at the University of California, Berkeley, tested 18 healthy adults on two days in the lab. On both days, participants watched videos of people walking toward the camera and videos that gradually zoomed in on inanimate objects — a test, with the random objects acting as a control, designed to measure their sociability. All of this happened while they underwent a functional magnetic resonance imaging (fMRI) scan. When they felt the person or object was uncomfortably close, volunteers pushed a button to pause the video. The catch, though, is that they were well rested for one day of testing and operating on no sleep the second day. When people didn’t get enough shuteye, they kept their digital social partner 18 to 60 percent farther away than when they were well rested. Plus, brain scans showed a couple of interesting patterns. When people were exhausted, they had more activity in the so-called near space network, a circuit that lights up when we notice potentially threatening people coming toward us. They also had lower amounts of brain activity in an area linked to positive social interactions.

Do I Look Sleep-Deprived to You?

So, being completely exhausted made people less sociable. (Well, duh. Who wants to deal with another human when your brain is fried?) But Simon and Walker took it one step further. After the in-the-lab volunteers finished watching the videos, the researchers taped them answering questions about various topics. Then, the pair showed these interviews to over 1,000 online volunteers who weren’t aware that, in some clips, the interviewees had been forced to stay awake all night. Not only were the online volunteers were significantly more likely to rate the sleep-deprived people as being lonelier, but, surprisingly, they also described themselves as feeling lonelier after watching those interviews. So the next time you’re feeling a little lonely, try getting a good night’s sleep. Your social life will thank you. (That is, of course, if you actually like people.)