Missing out on a night's sleep causes "robust alterations" in the functional connectivity of the brain, according to

a new paper just out in Neuroimage

. Neuroscientists Tobias Kaufmann et al. of the University of Oslo acquired resting state fMRI scans from 60 male volunteers. The participants were scanned three times each - once in the morning, again the same evening, and then finally the next morning. But only some of the volunteers were allowed to sleep in the night before the final scan. The others were kept awake, experiencing sleep deprivation. The results showed that sleep-deprivation altered connectivity, compared to the well-rested condition. The evening condition (i.e. at the end of day spent awake) was intermediate between the two, suggesting that wakefulness causes progressive changes that build up over time. 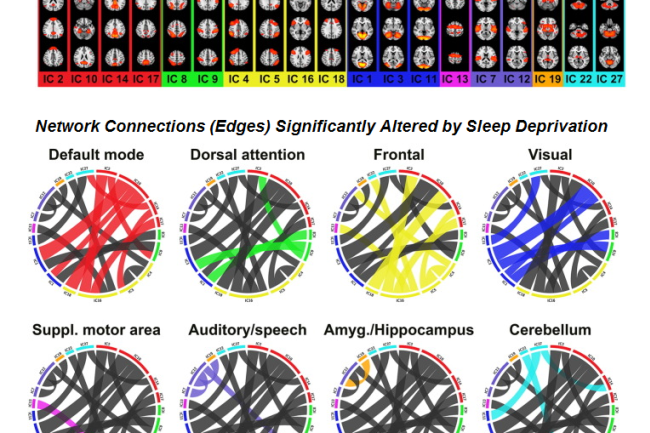 Sleep deprivation was associated with altered connectivity across diverse brain regions. Generally, positive connectivity between brain regions was increased by lack of sleep. Of the 17 connectivity "edges" that were significantly affected by sleep status, 13 became more positive, while only 4 became more negative. This result is a reminder that positive connectivity isn't always "good". Intuitively we might expect brain connectivity to be a sign of "information processing" and "integration"; but Kaufmann et al.'s data suggest that the brain gets more connected when it's exhausted. On the other hand, are there more prosaic interpretations of these data? When I first saw this paper, I thought: we know being asleep alters brain connectivity, so what if the sleep deprived participants fell asleep during their final scans? But the authors were alert to this problem, and they used an fMRI sleep classification analysis to detect periods of sleep, based on brain activity. The results were not changed after excluding these periods. Likewise, the sleep deprived volunteers had more head motion, another potential fMRI confound, but the results held even after controlling for this. But I spotted another potential problem. Kaufmann et al. asked their volunteers to keep their eyes open during the resting state scan. This is common practice, but we all know that it can be difficult to keep your eyes open when you're sleep deprived. Closing your eyes has pronounced effects on brain activity as measured with EEG. Maybe it also affects fMRI? Kaufmann et al. had no way of knowing whether people's eyes were open or closed, and couldn't control for it. Still, the authors note that wakefulness (and the time of day when scans take place) is a potential confound in fMRI studies. If some of the participants are scanned in the morning and others have their scans in the evening, the latter will be more tired, and their brain activity may differ:

By suggesting an important role of time-of-day on brain connectivity, [our data] have potentially important implications for a range of applications, including a potential bias in scientific studies when group assignments are not balanced for time-of-day.