Silent Neurons: The Dark Matter of the Brain?

Now here’s a paper with an interesting title: The dark matter of the brain

Author Saak V. Ovsepian argues that “the great majority of nerve cells in the intact brain do not fire action potentials, i.e., are permanently silent.” This is a remarkable claim, and it raises the question of what these silent neurons are doing. However, I didn’t find myself convinced of the existence of this ‘dark matter’.

Ovsepian points out that numerous studies have found that only a minority of the neurons in a given brain region are observed to fire (spike), even in response to stimuli that activate that area:

So the ‘dark matter’ of the brain are neurons which don’t fire in response to any stimulus tested.

Silent neurons are related to the concept of ‘sparse firing’, which is believed by some to be a general principle of brain organization. Sparse coding means that a given stimulus only activates a small number of neurons. By contrast, non-sparse coding would mean that every stimulus activated many neurons, but to different degrees. Both of these schemes could encode information.

The existence of silent neurons implies sparse coding – but not vice versa. Under sparse coding, most neurons will be silent in response to any single stimulus. Here’s an illustration (inspired by Fig 1 here) of sparse firing in a group of 12 neurons, where each stimulus activates 2 or 3 neurons and has no effect on the others: 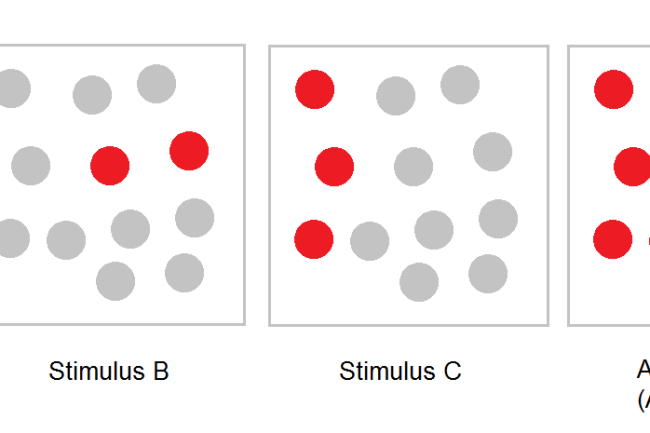 In this example, five of the neurons are ‘silent’ – they don’t respond to any of the stimuli used in the experiment. It seems obvious, however, that this is not an absolute definition of ‘silent’. If we did a more extensive experiment using more diverse stimuli, we might find at least one stimulus that does activate each neuron – and there would be no more silent cells. 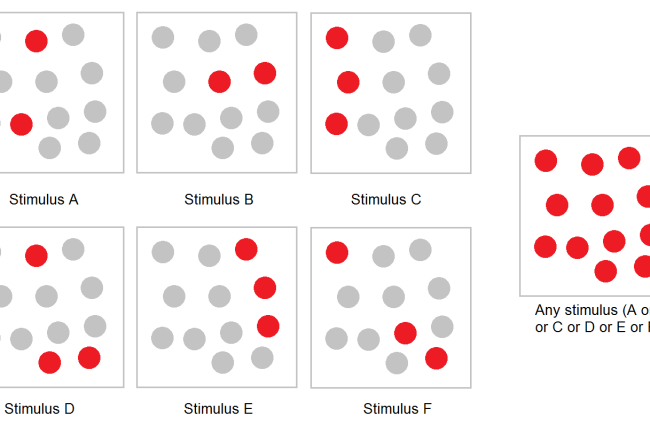 As Barth and Poulet put it, “the fraction of responsive cells may be underestimated because the experimental stimulus applied may not be appropriate to drive the neurons tested.” In order to know whether there are truly silent neurons that don’t respond to any stimulus, we would need to test all possible stimuli – which is a tall order.

Ovsepian does acknowledge this point, saying that:

Another possible explanation for the presence of great numbers of inactive neurons is their narrow tuning to respond only to specific inputs [i.e. sparse coding]… but whether these considerations can explain the perpetual silence of the vast majority of neurons throughout the brain remains to be shown.

Yet I’d say that the burden of proof is on someone who claims the existence of absolutely silent cells. The experiments cited by Ovsepian have used very narrow sets of stimuli, in absolute terms. No-one has yet recorded brain activity from rats while exposing them to every possible sound that a rat could hear(!).

Finally, Ovsepian goes on to discuss the evolutionary significance of silent neurons. He suggests that these inert cells might represent ancient neural circuits that have since become obsolete. These fossilized brain circuits are subject to neural inhibition which keeps them suppressed:

The brain’s dark matter epitomizes the tangible and highly composite byproduct of the natural evolution, trapped in inactive and invisible state by inhibition. Rooted deep in the phylogenic past, vast collections of fossilized neurons and networks once had been the integral part of functional circuits and played their adaptive role in life affairs.

I didn’t find Ovsepian’s evolutionary argument that persuasive, because I’m skeptical of the whole ‘dark matter’ concept. Still, the idea that remnants of our ancestors’ brains still exist in our own skulls is a rather fascinating one. It suggests Jurassic Park-like scenarios in which someone succeeds in reactivating these lost neural functions – and there is evidence that this can happen in very specific cases such as reflexes. In general, though, I don’t think we can say that the majority of our neurons are fossilized.