Is it the job of peer reviewers to detect scientific fraud? I've been pondering this question for a while but lately my interest was sparked by the case of a retracted cancer biology paper in the high-profile journal Nature Cell Biology. Written by Taiwanese researchers Shih-Ting Cha et al., the article was published on the 15th August and retracted just three months later, after anonymous posters on PubPeer noticed several anomalies in the results. For instance, there was image duplication: the paper contained identical images that were meant to be of different mice: 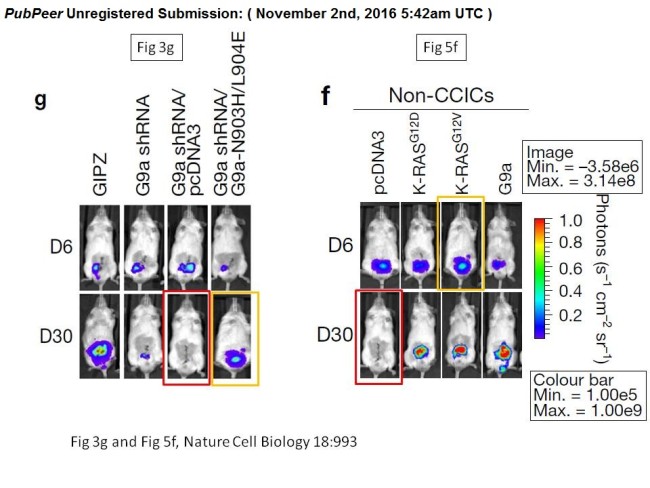 Along with other image anomalies found in the paper, these duplications are evidence of either serious errors in manuscript preparation, or fraud. Now, Nature Cell Biology is a peer reviewed journal. Perhaps three or four independent scientific experts reviewed the Cha et al. paper before it was published. Shouldn't they have spotted these problems? Isn't that the job of reviewers? Opinions differ, as this (unscientific) poll of my Twitter followers shows: 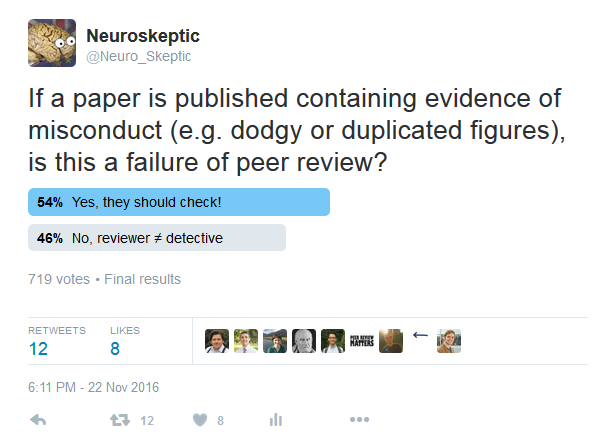 Just over half of the 719 respondents felt that reviewers ought to detect evidence of manipulated images. In my view, reviewers should spot issues like this, because if they don't, then the purpose of peer review is called into question. If peer review isn't able to detect these kinds of very serious problems in manuscripts, what then is the point in it? I understand why reviewers are often unable to spot these problems and unwilling to even look for them: it would just take too much time. Reviewers are all busy scientists who perform peer review essentially for free. Scientists get paid for publishing peer-reviewed papers, not for reviewing them. It's not surprising that many reviews are limited in scope. So as I see it, we as scientists need to decide if we're serious about peer review or not. If we believe that peer review is still the best way to ensure that good science get published, we should encourage reviewers to do a thorough job. This might require giving reviewers formalincentives. On the other hand, if we're not willing to invest in making peer review work, then we should stop using it, and embrace the emerging alternative: allow scientists to (self-)publish what they like, and leave it to post-publication peer review (PPPR) services such as PubPeer to perform the quality control.