Secrets of a "Zombie" Fungus Revealed

A parasitic fungus that controls the behaviour of fruit flies has, for the first time, been studied in the lab. In a fascinating preprint posted on Biorxiv, researchers Carolyn Elya et al. report how they discovered the pathogen in the wild near Berkeley, California. The fungus belongs to the species Entomophthora muscae, which is already known to prey on various species of wild flies. But Elya et al. found a way to infect laboratory flies with the disease, thus allowing them to study the fungus in unprecedented detail. Elya et al. first noticed the Berkeley strain of Entomophthora while doing field-work for an unrelated fly experiment:

In late July 2015, we noticed that several flies had died with raised wings at the bottom of [a pan filled with fruit] and, upon closer inspection, observed remnants of fungal growth and sporulation on these dead flies.

The researchers suspected that Entomophthora was to blame. They knew that this parasite has a unique and creepy life-cycle. When a Entomophthora spore lands on a fly, it enters the host's body and begins to grow, feeding off the flies' organs and body fat. Once the host is nearing death, usually at sunset, the doomed flies engage in "summiting" behavior: they climb to a high place and raise their wings in a characteristic pose, before expiring. Then, from the dead host's abdomen, fungal structures called conidiophores sprout out. Upon maturation, the conidiophores eject tiny white spores, which spray down on the surrounding area and infect new victims. 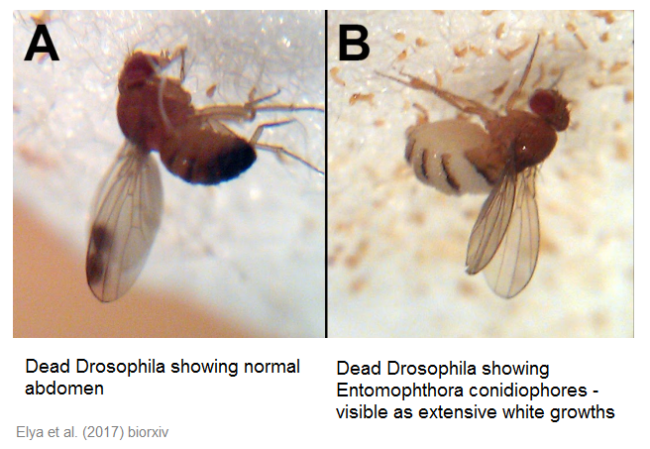 What peaked Elya et al.'s interest was that the dead flies in the Berkeley fruit bowl were Drosophila melanogaster - aka one of the most-studied laboratory animals in the world. The infected flies were wild cousins of the lab animals. Elya et al. realized that if they could bring the fungus into the lab, they could exploit the huge amount that is already known about Drosophila biology to better understand how the pathogen does what it does. After much effort, Elya et al. succeeded in establishing 'Entomophthora muscae Berkeley' in captive flies:

To establish an in vivo infection, wild cadavers were co-housed overnight in a confined space with healthy, lab-reared [Drosophila], and exposed flies were monitored nightly for two weeks to identify E. muscae Berkeley cadavers. We repeated this process daily for several weeks before we were able to passage the infection.

With this breakthrough, Elya et al. were able to make the first detailed studies of the Entomophthora infection. They discovered that infected animals most commonly die after four or five days, but flies unfortunate enough to be hit by multiple spores sometimes die sooner. The researchers also observed that the process of "summiting" and death is prolonged and rather gruesome:

On the last day of life, flies infected with E. muscae Berkeley show a precipitous decline. The first portent of imminent death is that flies cease to fly... moribund flies will begin to exhibit a shaky and slowed gait which is usually coincident with an upward climbing or movement towards a vertical surface.

Once their long climb to a high place is completed, things get even worse for the doomed flies. First, fungal growths glue the insect in place, preventing further movement (although "the fly may move its legs in what appears to be an apparent attempt to escape"). Then, the fly painstakingly adopts a death pose:

The fly then begins to raise its wings up and away from the dorsal abdomen. This process has been observed to take on the order of ~10 minutes, with wing raising occurring in small bursts, reminiscent of the inflation of a balloon.

Once the wings are out of the way, the path is clear for the fungal conidiophores to emerge and project spores. Elya et al. found that spores are ejected at a speed of up to 21 miles per hour - amazingly fast given how tiny they are. Here's a timelapse video of a spore ejection: [embed]https://youtu.be/T5Pi0JoEm0I[/embed] So what is the explanation for the summiting and wing-extension? Does Entomophthora hijack the fly's nervous system, forcing them to engage in this behaviour? Elya et al. reveal that the fungus penetrates the nervous system of the host early in the course of the infection, which bolsters the "nervous hijack" theory. However, the fungus appears to grow haphazardly in the fly's brain, suggesting that the pathogen doesn't target particular areas. The researchers conclude that at present, the mechanism of Entomophthora's behavioural modification is unclear, but:

E. muscae Berkeley’s invasion of the nervous system grants the fungus direct access to host neurons and may be mechanistically important for achieving behavioral manipulation of the host fly.

This is a fascinating piece of research, although as a preprint, it's not peer-reviewed yet. Entomophthora calls to mind the famous Cordyceps, well-known for infecting ants (amongst other creatures) and turning them into 'zombies', before spores burst from the corpse. In recent fiction, the idea of a mutant Cordyceps fungus infecting humans is a popular zombie-apocalypse plot device: see for example The Last of Us and The Girl with All the Gifts: 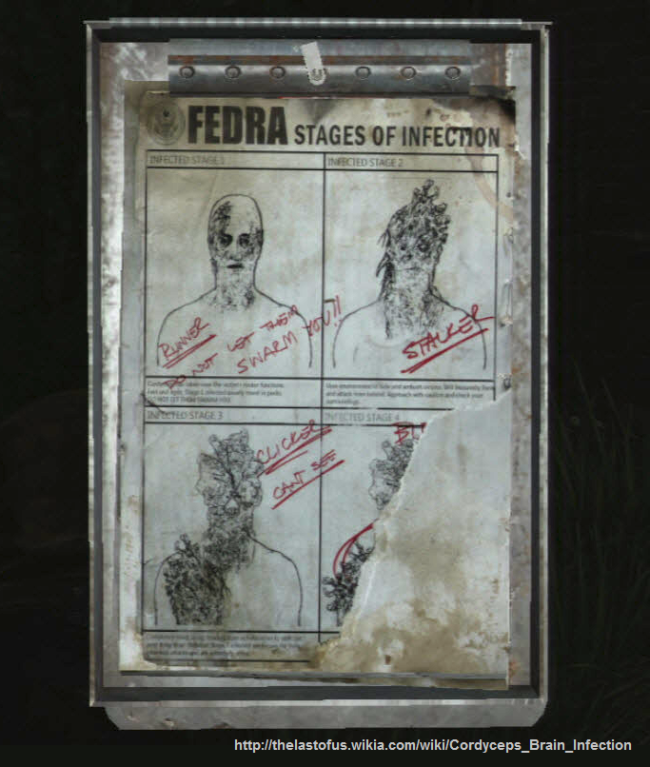 Perhaps we will soon see an Entomophthora-based zombie thriller? They could call it "Dropping Like Flies".