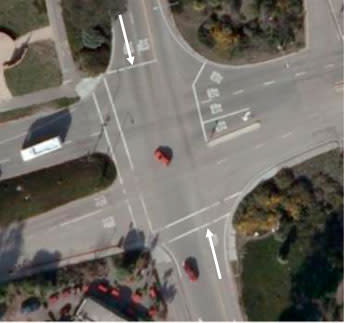 The intersection in question.

For two Fridays in June 2011, from 3 to 6 pm, two experimenters sat near an intersection in San Francisco and watched the cars. They arranged themselves so that drivers couldn't see them, and every now and then, they recorded the make and physical appearance of a car and tried to guess the gender and age of the driver. As their chosen cars pulled up to the intersection, they kept track of which ones cut off others. Later, in another study, they positioned an experimenter at a crosswalk. They took note of which cars neglected to stop for the pedestrian. No, this is not performance art---it's science! These studies, and five others that had people variously taking candy from children and pretending to be unscrupulous bosses, were recently published as a paper, in which the researchers claim they collectively show a connection between higher socio-economic class and greed. The cars perceived as high-status turned out to have been the most frequent cutter-offers. The "upper-class" subjects reported that they took more candy. The subjects with higher socioeconomic class more frequently chose not to tell a job candidate that the job would soon be eliminated and had better opinions of greed. The other studies were a mish-mash of related designs, all producing similar kinds of results, which many media outlets have interpreted as "Wealthy People = Greedy Jerks." But we're having a pretty hard time drawing all these pieces together to see what the researchers state in their introduction: "We reason that increased resources and independence from others cause people to prioritize self-interest over others’ welfare and perceive greed as positive and beneficial, which in turn gives rise to increased unethical behavior. We predict that, given their abundant resources and increased independence, upper-class individuals should demonstrate greater unethical behavior and that one important reason for this tendency is that upper-class individuals hold more favorable attitudes toward greed." Wow! There's a lot to unpack in that statement. Like the collection of studies, all of various relevance to real situations, it's a conglomeration of ideas, in various states of proven-ness and relationship to each other. It may well be that people with more resources have greater independence and are less apt to be polite to others. It may also be that people with lots of money think it is alright to look out for oneself when the situation provides a chance to profit. It may be that inclination is what led them to be successful---or perhaps, if they were born into money, they copied the attitude from their parents. But the tests used in this flurry of studies test isolated moments and tricks of the brain, and to extrapolate from them to larger statements, the researchers would have been better served by taking it one step at a time and making it very clear that they had considered all the reasons for their results. Take these statements with a grain of salt, is the advice dispensed by Tyler Cowen at Marginal Revolution

and Kevin Drum at Mother Jones

on this study, and we agree.