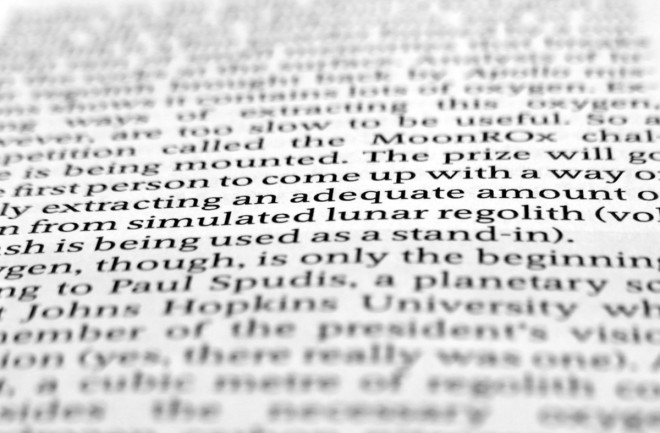 (Credit: Shutterstock) Here's a sentence. Here's another one. Notice anything? If you're like me, you're probably rolling your eyes right now. Using two spaces after a sentence seems to serve no other purpose today than to signify that the typist probably learned their keyboard skills in another era. And it's pretty annoying, to boot. Nevertheless, there's a minority of purist (or simply contrarian) keyboard warriors who hold that the two-space rule is actually the right way to go. Indeed, no less an association than the American Psychological Association in its manual recommends using two spaces "for ease of reading comprehension."

Those fretful few just got some good news. A new paper from three researchers at Skidmore College provides some (extremely mild) evidence that adding a little breathing room between sentences could help readers process information they read. The scientists had 60 students read a number of passages while they tracked their eye movements. The students saw a few different versions: One had a single space after periods and commas, one had two spaces after each, and the last two had double spaces after either just periods or just commas. After reading each passage, the students were asked a question to judge if they understood it or not. While none of the differences in spacing seemed to affect how well the students comprehended the passages, putting in two spaces after a period did seem to help them process the sentences a bit faster. When the double-space was present, their eyes fixated less on the break between sentences and they moved to the next one more quickly. Ultimately, it seemed it was a bit easier for their brains to make sense of when sentences were more clearly broken up. They published their findings last week in the journal Attention, Perception and Psychophysics.

Study author and associate professor of psychology at Skidmore Rebecca Johnson says that her results agree with previous studies finding that more space is generally helpful to us when we read.

"Increased spacing has been shown to help facilitate processing in a number of other reading studies," she says. "Removing the spaces between words altogether drastically hurts our ability to read fluently, and increasing the amount of space between words helps us process the text easier when compared to regular, single spacing."

It's a long-awaited victory for the two-spacers, but the results might not be strong enough to change many people's minds. The typographical conventions didn't affect how well the students understood the passages, which is really what matters in most situations. The sample size wasn't really that big here, either, and as the researchers note, the font they used could play a role as well. They chose Courier New for their study, which is a monospace font, meaning that every letter gets the same amount of space. Many fonts in use today give different letters proportional space — an "i" gets less space than an "m", for example. Monospace fonts on typewriters are the reason we have the double-space convention in the first place — when everything's the same width, it's hard to see where sentence breaks are. Had the researchers used a proportional font, as most word processors today use, their results could have been different.

"The majority of previous studies that have looked at eye-movements in reading across varying fonts and sizes have reported very few (if any) differences," Johnson says. "Within reason, font and size differences don’t seem to impact readability. But, whether we would find differences using other fonts is currently unknown."

In addition, they noticed a difference in processing speed between those who normally typed using two spaces (surprisingly, people still do this), and those who didn't. That additional variable could have thrown the findings off a bit as well. So, it's not an end to the debate, and it's doubtful to change many opinions. Those who like their sentences to have a bit of room to roam have a measure of evidence to back up their claim, while those who are more stingy with their spaces will likely continue to make the same argument they have for years — it just looks better. (UPDATE: I reached out to paper author Rebecca Johnson to ask whether they chose to use one or two spaces in their manuscript, an implicit endorsement, if you will. I've added her emailed response below, as well as quotes from her above. And, for what it's worth, she uses two spaces in her email.)

"When we submitted the paper to Attention, Perception, and Psychophysics, we submitted it as a Word file using APA-formatting with two spaces after each period (as required by the journal)," Johnson says. "The typesetter then changed it to one space during production (at the same time that they changed it to full justification)."