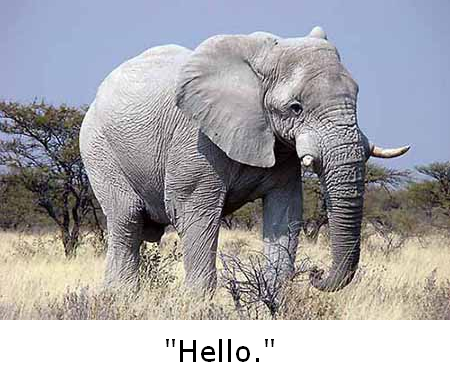 A talking white elephant called Szilamandee could save the world with his wisdom and "teach us with the deepest voice of history", according to an academic paper published today. The article appeared in the journal

Progress in Biophysics and Molecular Biology.

The authors are led by Otto E. Rössler, a biochemist. It's called Is it Ethical to heal a young white Elephant from his physiological Autism? Many thanks to Michelle Dawson for bringing it to my attention. Rössler et al. start out by introducing a theory of autism as "smile blindness", suggesting that in non-autistic people, smiles serve to bond a child to his or her mother, and thus give rise to the human self: "the playroom is the theater for a radical transformation occurring in a young human being who is not smile-blind". They call this the "holy moment of personogenesis". In children who are 'smile-blind', this holy moment never occurs, but according to Rössler et al. this can be remedied: "these smile-blind individuals can be healed causally. Namely: by the 'acoustic smile therapy.'" in which a positive sound is supposed to replace the smile. Rössler et al say that this therapy was first proposed in 1968 and then "about a dozen times" since, but they admit that it has never been tried, "perhaps because it never came to the ears or eyes of an active member of the therapeutic profession". Nonetheless, they say, many eminent academic figures have expressed interest in acoustic smiles:

"Gregory Bateson and Niklas Luhmann supported it. Jürgen Habermas’ only criticism concerned the fact that an illegally printed edition of his book had been quoted. Noam Chomsky showed interest in a long phone conversation."

So where does the elephant come in? Well, starting from the 'AAAA' premise that 'all animals are autistic', Rössler et al. propose that autism in some animals could be cured:

Elephant mothers utter very deep, to the human ear, inaudible, bonding sounds for their calf and vice versa [20]. Can one use an infrasound generator with a loudspeaker carried along to consistently reward the toddler calf whenever oneself as the loving care-taker is delighted by the momentary happiness or friskiness of one’s protégé? It goes without saying that the answer is in the positive. The consequence is bound to be the same as it was described for the human playroom above: Interactional personogenesis.

Rössler et al. explain that using acoustic smile therapy, a baby elephant could actually be made into a person.

Imagine: a superhumanly wise elephant who talks to the more child-like humanity – a Hindu story [23] revived by modern science. Humankind would find itself in an ancient Abraham-Isaac-like situation, one could say. ...In this way, the holiest moments in a human playroom – never so far exposed to the public eye – could be reproduced in an elephant barn for everyone to witness and be moved in their hearts.

This elephant would teach itself to talk, and would become a new Nelson Mandela, a wise leader who would guide humanity to a "new Arcadia":

The elephant may then love to learn to speak, in the aftermath of his having taken the initiative in trying to reward his partner in a deep emotional connection... Eventually, the nonhuman partner might become the advisor of a planet in need of outside help. But this will be possible only if the adoptee is never confronted with deliberate malevolence, as Jesus demanded for the holy souls of children. The new partner of humankind would – it was argued – bring back the spirit of Mandela who was an equally foreign intelligence.

Rössler et al. note that the nuclear physicist Leo Szilard wrote a work of fiction in which dolphins turn out to be more intelligent than humanity. Therefore,

The elephant would then deserve to be given the composite name Szilard-Mandela (Szilamandee). Being human in the sense of humane is a much bigger thing than society is aware of. Szilamandee will be able to teach us with the deepest voice of history.

This is without a doubt the strangest thing I've ever read in the pages of a scientific journal. It far outshines the previous record-holder. Otto Rössler is himself a remarkable researcher. A few years ago he was part of an effort that unsuccesfully sued CERN in an attempt to prevent the Large Hadron Collider (LHC) from switching on. Rössler expressed concern that the high-energy physics of the LHC might create a black hole, and thus destroy the world. In fact, CERN gets a mention in the new paper - as an example of the kind of dangerous human foolishness that Szilamandee will put a stop to. Progress in Biophysics and Molecular Biology is published by Elsevier and has Denis Noble of Oxford University, one of the fathers of systems biology, as editor-in-chief.