Phineas Gage blasted an iron rod through his brain. He survived, but his personality did not. A new look at brain connections explains why. 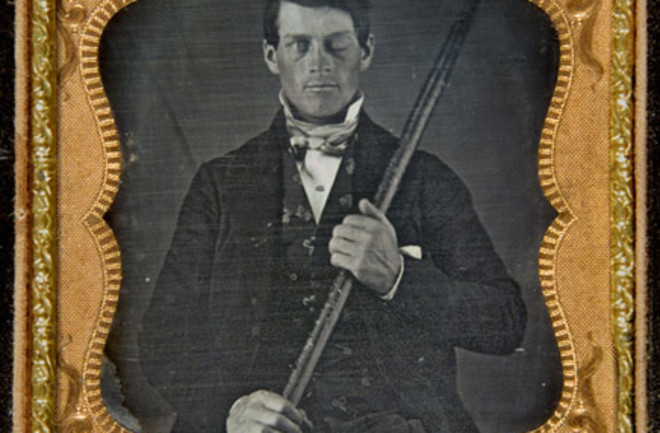 One fall day in 1848, a railroad foreman named Phineas Gage was tamping blasting powder into a hole in the rock with an iron rod. The powder suddenly ignited, launching the tamping rod, more than three feet long and more than an inch thick, straight through his cheek and out the top of his head. A local physician named John Harlow arrived to find Gage drenched in blood but “perfectly conscious.” The tamping iron had rocketed through his skull—his crew found it 100 feet away, smeared with brain tissue—but it missed, by fractions of an inch, several areas critical for sustaining life.

More extraordinary than Gage’s survival was the transformation of his personality. Previously a conscientious man, he became obnoxious, profane, and unreliable. “Friends and acquaintances said he was ‘no longer Gage,’ ” wrote Harlow, who hypothesized that the damage to the frontal regions of his brain was to blame. At the time, there was little evidence that personality traits were tied to specific brain regions. Modern science has confirmed this idea, but researchers are still working to understand how, exactly, different regions of the thinking organ conspire to make us who we are.

And Phineas Gage is still providing clues. This year, John Van Horn, a neuroscientist at UCLA, paired computed tomography scans of Gage’s skull taken a decade ago with new imaging data of typical, healthy brains. The resulting images suggest how damage to Gage’s white matter—the nerve fibers that carry information between brain regions—altered the way the man thought, felt, and acted. This, the first study to explore Gage’s white matter, suggests that breaking the links between his frontal cortex and other regions led to his dramatic personality change.

A Harvard doctor created a plaster cast of Phineas Gage’s head in 1850. In 1860 Gage died of an epileptic seizure, probably caused by his injury. Seven years later, John Harlow heard of his death, and exhumed the body, with the permission of Gage’s family. Harlow donated the skull to the Warren Anatomical Museum in Boston. It is now too fragile to undergo further imaging.

While studying traumatic brain injury at UCLA, John Van Horn requested the last scans of Gage’s skull from Brigham and Women’s Hospital. It took several months of digging through the archives to locate the images. Van Horn used the data, along with detailed clinical accounts, to model the tamping iron’s trajectory through Gage’s brain.

Anatomy of a Disaster

With half his brain injured, Gage could still walk, talk, and work; the other hemisphere may have compensated for the damage.

John Van Horn also found images in the hospital’s set that looked headlike, but oddly warped. He realized that Gage’s plaster cast had been X-rayed along with his skull. With those images, he modeled the railroad foreman’s entire head. Together, the set of images offer a more complete look at a man whose bizarre accident hinted at how the brain creates the self.

[This article originally appeared in print as "The Man Who Wasn't There."]