Saving the World, One Science Fair at a Time 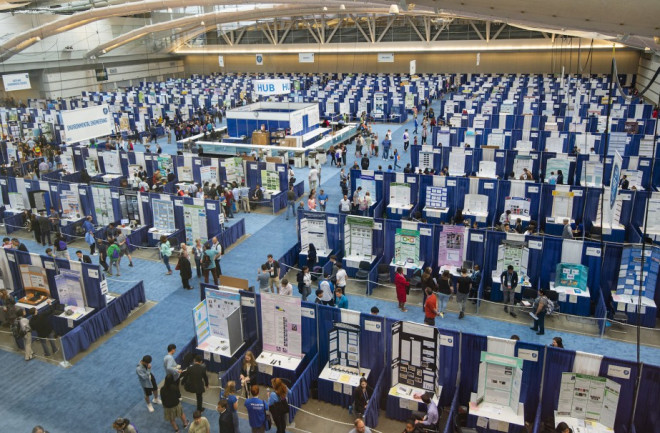 This is where the magic happens: The main judging hall for the Intel International Science and Engineering Fair, the focus of the new documentary Science Fair. (Credit: Chris Ayers/Society for Science & the Public)

When I was 16, I participated in the Montgomery County, Maryland science fair. My entry was–as I recognized even at the time–a fairly middling effort, more a research project than an original experiment. I was not surprised when I walked away with an appropriately middling “honorable mention” in my category. It was an inspiring experience anyway, for reasons that are perceptively captured in the marvelous new documentary Science Fair.

The culture of the science fair is one of profound optimism, marked by a sense of common purpose more than a sense of competition. I was certainly a little jealous of the more ambitious projects I saw all around me, but mostly I was awed by the brainpower on display, the vast range of problems that kids my age were trying to solve (or at least to understand a little better). Science Fair, the movie, fully embraces these themes as it follows nine budding researchers from around the world working their way to the International Science and Engineering Fair (ISEF), the largest competition of its kind.

The resulting documentary is, in the words of co-director Cristina Costantini, “a love letter to the subculture that saved me.” She herself was an ISEF participant in her teens. That love for the science fair culture radiates from the screen, and so too does her generous affection for the can-do nerdiness of the competitors and their mentors. The competitive aspect of ISEF gives Science Fair a taut dramatic edge. Less expected, the film also crackles with humor, much of it springing from the students’ mix of self-aware insights and guileless enthusiasm. All the elements add up to an inspiring but also joyous experience.

Science Fair the movie, like science fair the cultural event, is a welcome antidote to the small-minded cynicism and anti-science attitudes so much on display these days. I had a chance to speak with Costantini, as well as two of the stars of her movie: Kashfia Rahman (a high-school competitor from South Dakota) and Serena McCalla (a research teacher from Jericho High School in Long Island, who has helped nine of her students get into ISEF). A lightly edited version of our conversation follows:

Each of you, in her own way, is a science obsessive. How did that come about? What are your origin stories?

Costantini: I was a science fair competitor when I was in high school, and science fair was my escape. I went to a football-obsessed high school, and for me it was the one place where I felt truly validated for my ideas and my thoughts. Science fair taught me so much about myself. It’s probably the reason I got into a good college. It totally changed my life. I’d always wanted to do a documentary based on my own memories of what the science fair was like. Then I found these two brilliant women, among others. The past two years have been so much fun telling that story.

Rahman: I’ve always loved learning, but I haven’t always liked school. School was always a little bit boring and routine for me. When I was in 6thgrade, I did this little project about how Harry Potter makes people better readers. It all began from there; it became a gateway. It was my first science project, and I’ve done science fair since, always in behavioral science and psychology. [Her ISEF project was “The Dynamics of Habituation: A Neural Study of the Effects of Repeated Exposures to Risky Behaviors on Cognitive and Emotional Responses in the Adolescent.”]

As I got older, science fair became an outlet for me, because my high school pretty much focuses only on athletics and it doesn’t have the resources or opportunities for kids who are interested in science. So I thought I’d continue my own nerdy little passions and keep going to science fair. It became an outlet for communication and learning — really just everything for me.

Who guided you and shaped your scientific interests?

Rahman: I’ve always been a  curious kid. If I ever had a question I’d look to books, the library, the internet, everything. Of course my parents always supported me in every endeavor, but the sort of subjects they’re involved in don’t necessarily align with psychology and the things that I became interested in. So as lot of it was self-discovery, lots of reading on my own. I just became more immersed in my passions as I went along.

Did you run into gender or racial barriers in science?

McCalla: In my undergraduate career, I was usually the only one of 500 in my classes who was a woman and black. I wouldn’t have the peer groupings in which to study, or even access to some of the old exams passed down by siblings. And there was no one else who looked like me in my courses, or who I had a close kinship with — that was a little discouraging. But I’ve always stated, if you want something in this life you can have it. I didn’t allow myself to be discouraged from continuing in science.

Costantini: For me, science fair was the first early validation that made me think, “Hmmm, I can do things. My ideas can be celebrated. My thoughts are worthwhile.” I think for young girls especially that’s really, really important. So while science fair is important for everybody, I think for young women it’s especially crucial. Science fair is becoming more gender equal; it’s just about equal now. We hope that the rest of the scientific community will follow suit.

Rahman: I come from a really small town in South Dakota, and I’m one of three Muslim people in a school of 900, and I’m the only person who wears a hijab. So that’s definitely something that’s hard to deal with. Doing science fair empowered me, it made me feel like I can do something that will make people know me for something other than my [religious] identity. If I do these science fair projects, people will start recognizing me for my personality and my talents rather than for my identity, which is not something that people are often appreciative of.

Part of what is so moving about Science Fair is seeing the participants transformation from nerdy outsiders to insiders within the culture of science. Did you all have your own moments of transformation like that?

McCalla: I never had an opportunity to do science fair in high school, I didn’t even know they existed. So when I first walked into an international science and engineering fair I was in awe. I was like: “Oh my God, my people!” Because they were all people who loved their thing, and they were striving to be excellent at their thing. It was amazing, and so enlightening, and fun. We [science fair types] are cool. Even though we seem nerdy, we’re just regular people. We’re sharing our gifts, which are our love of science, and we’re learning to help other people benefit from them.

Rahman: For me it was just coming to ISEF as a bright-eyed, jaded freshman! All these kids excited about communicating science, just like me. It’s something I never found in my hometown. It was a relief. It was wonderful.

Costantini: For me, you see that transformative moment in the movie: the science fair dance, where the kids really get down. I remember thinking when I was in high school, “Wow, this is actually a pretty good dance for a science fair dance.” In the movie, one of the kids says, “It’s quite lit for a science fair party,” and it is quite lit. That’s the moment when it’s not just about science, it’s about this bigger culture. You can feel the excitement when you are there.

Kashfia in her natural environment, fitting brain sensors on a test subject in her high school library. (Credit: Univision)

Kashfia in her natural environment, fitting brain sensors on a test subject in her high school library. (Credit: Univision)

Dr. McCalla, you talk about sharing your gifts. What is the message of science fair in terms of civic duty, in terms of helping others?

McCalla: Science fair allows me to encourage students to follow their passions. Because I am mentoring them, they’re now able to shine. The gift that I’m giving them, they’re returning to society at large. I get to see groundbreaking science, and 17-year-olds are doing it. That’s pretty remarkable! Now that they know they can do it, they will. That’s why I do what I do, and I hope  someone will follow up and keep doing what I do long after I’m gone.

Rahman: Science fair is not about the awards and the prizes that people often see science fair as. It’s about the opportunity to communicate with a diverse group of individuals, learn about yourself – it’s about self-discovery and introspection. I think that’s very valuable in a world where we’re often told what to do or what to be. I think science fair gives you that boost in self-discovery that you can use in any field, in any endeavor that you pursue.

Costantini: We live in a time when a lot of the adults in our world are acting like children, and you see a lot of the children acting like adults. For me, this movie is about reminding people what’s important, whether that be the contribution of scientists, or women in science, or the contributions of immigrants – the three of us are the children of immigrants. These are messages I think people really should be hearing right now. I also want to make people laugh, and make people fall in love with these little inspiring nerdy kids. It’s reminding us of who we are as a country and where our heart should be.

An eccentric final question, if I may. Suppose you could live any arbitrary amount of time, always healthy, never aging, but everyone else would age around you. How long would you want to live?

McCalla:  I want to live indefinitely. If you’re going to give me the opportunity to stay here forever, I’m down. I want to see how much we grow. I want to see if these students will fix the problems that my parents and their parents and me and my generation have caused, and I’d like to see how they fix it – if they will fix it with kindness, too. I’m seeing that these young people are not just great scientists, they’re great humans. I hope that some of the things that they’re seeing the adults do don’t jade them and make them less phenomenal. I would love to stick around and see what they do, how they rear their children and pay it forward.

Rahman: I agree with Dr. Macala completely. I want the opportunity to see what the future becomes. A lot of adults are talking about how my generation is going to change the world, for better or for worse, and I really want to see how that plays through.

Costantini: We’ll see how long the Earth is around. I’ll stay as long as it’s still comfortable here.