Rorschach Tests at the Nuremberg Trials

After the fall of Nazi Germany, the victorious Allies sought to bring the leaders of the Third Reich to justice in the form of the well-known Nuremberg Trials. Less famous are the attempts by psychologists to understand the Nazi mind in the form of psychological evaluations of the Nuremberg defendants. A new paper by Joel E. Dimsdale of the University of California San Diego looks at one of the stranger episodes in the aftermath of WW2 - the use of the Rorschach "Inkblot" Test on Nazi detainees. 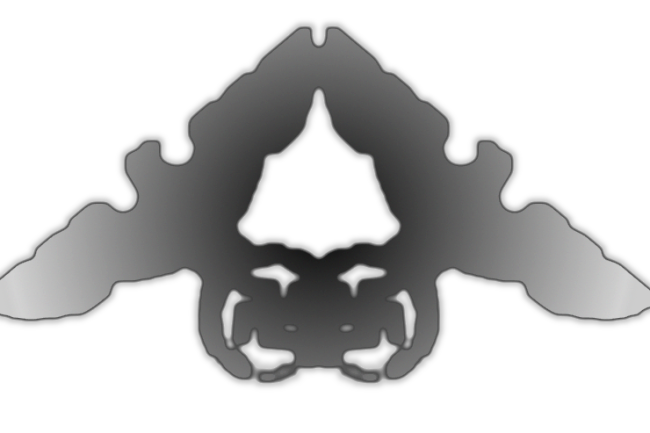 Dimsdale notes that "The [Nuremberg] trial was not so much a 'who done it' as it was a 'why did they do it.'" Everyone knew what the Nazis had been done, but what had driven these men to do these things? Was it mental illness? So interest in study of the Nazi's psyches was intense among American psychiatrists and psychologists:

On June 11, 1945, a group of medical societies wrote to [the chief U.S. prosecutor at Nuremberg] Robert Jackson requesting urgently that the psychology of the war criminals be studied. The societies were remarkably diverse, including the American Association on Mental Deficiency, the American branch of the International League Against Epilepsy, the American Neurological Association, the American Psychiatric Association and the National Committee for Mental Hygiene...

These medical societies actually concluded their plea with a request that executed Nazis should be "shot in the chest, not the head", so that their brains could be preserved for autopsy. On that point, they didn't get their way - the method of execution at Nuremberg was hanging followed by cremation, precluding Nazi neuroscience autopsies. However, another of the psychologists' requests was granted: the request that defendants should be examined using "psychological tests such as the Rorschach". A brilliant Army psychiatrist and Rorschach expert, Lt. Col. Douglas Kelley, led the interviews. He was aided by a young psychologist Gustave Gilbert, who acted as his assistant and translator. They embarked upon an intense program of interviews:

Kelley claimed to have spent 80 hours with each of the prisoners during his time at Nuremberg. Given the cramped quarters in the prison cells, Kelley and Gilbert... would conduct interviews sitting on each prisoner's small cot with the prisoner sandwiched between them.

Both Kelley and Gilbert later wrote books about their experiences at Nuremberg but, Dimsdale says, the Rorschach's role in the story has largely been forgotten, partly because the data wasn't published at the time, and only surfaced in 1975. 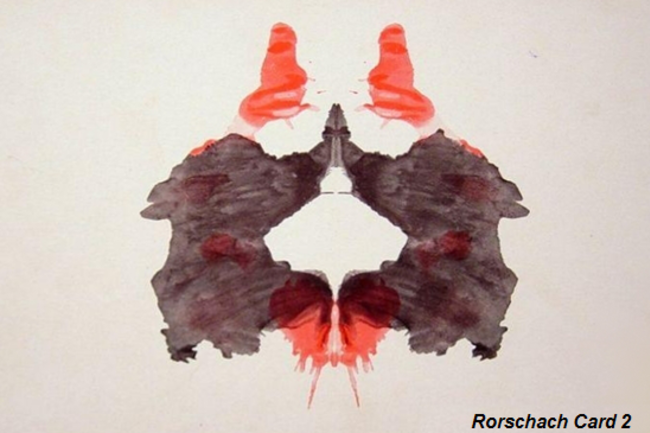 Dimsdale then focuses on the responses to Rorschach Card 2 (see above.) Reichsmarschall Hermann Göring said of this card:

Two dancing men. A fantastic dance. Two men, here are their heads, their hands together, like whirling dervishes. Here are their bodies, their feet.

According to two Rorschach experts, Miale and Selzer, writing in 1975, the fact that Göring saw dancing figures in this inkblot pattern indicates a psychic pattern of "hypomanic defense" while the fact that he saw the men as having red hats "indicates an emotional preoccupation with status". Hmm. Rudolf Hess, Hitler's former Deputy Führer, didn't see dancing figures in Card 2 but rather described it as:

Microscopic cross-section, parts of an insect with blood spots... the leg of a fly with red blood spots; space in the middle is the marrow... A mask. Mask of an island savage... the opening is for the mouth... it is devilish, that is why the eyes and beard are red.

Miale and Selzer interpreted Hess's as "the remnants of a violent, excitable, unrelated emotionality, which is still intense but is split off from contact with anything real." Disturbing - but what does all this mean? Were the experts just seeing what they expected to see, assuming that the Nazi's responses were abnormal because they were Nazis? A 1976 study by Molly Harrower suggests so. She gave the Nuremberg transcripts to ten Rorschach experts, mixed up with Rorschach responses from some non-Nazis, including some Unitarian ministers. The records were anonymized (blinded) and the Rorschach experts were asked to work out which set of responses came from the war criminals. They proved unable to do this better than random chance. Dimsdale concludes that the Rorschach probably added little if anything of value to the Nuremberg process, but he ends by saying that the desire to understand the mentality of crimes against humanity is a noble one:

It is regrettable that in contemporary War Crimes trials we see no continuation of the efforts at scientifically studying the perpetrator.

Dimsdale, J. (2015). Use of Rorschach tests at the Nuremberg war crimes trial: A forgotten chapter in history of medicine Journal of Psychosomatic Research DOI: 10.1016/j.jpsychores.2015.04.001