Last year I wrote and published a fake ‘scientific paper’ to highlight the problem of predatory scientific journals. My article, following in the tradition of earlier fake journal ‘stings’, was complete nonsense, full of Star Wars references and quotes, but it was published by a number of dodgy journals.

Now, another sci-fi sting has taken place, based this time on Rick and Morty. The stinger, Farooq Ali Khan, created a hilarious paper called Newer Tools to Fight Inter-Galactic Parasites and their Transmissibility in Zygirion Simulation.

The paper, reporting experiments on the treatment of space parasites, was published in three supposedly peer-reviewed journals. You can find it at ARC Journal of Pharmaceutical Sciences, IOSR Journal of Pharmacy and Biological Sciences, and Clinical Biotechnology and Microbiology (the latter seem to have now deleted it, but Google caches show it did appear there.) 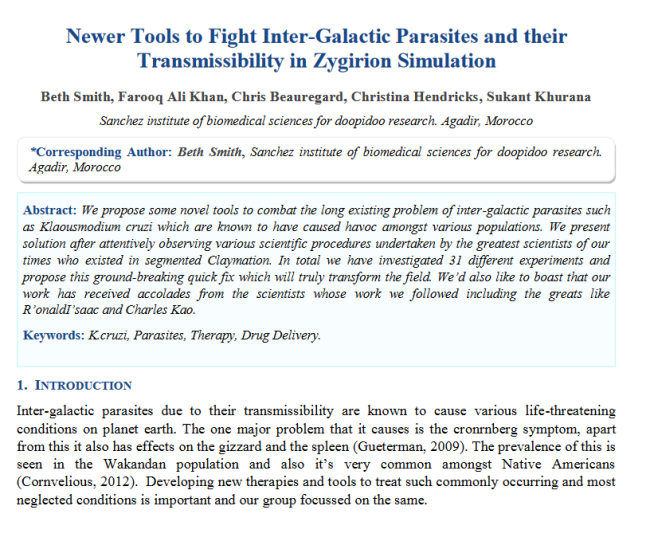 “Newer Tools to Fight Inter-Galactic Parasites” is full of Rick and Morty memes: the title is a reference to perhaps my favorite episode of the show; Zygirions are intergalactic scammers from another episode; first author Beth Smith is the daughter of the main character Rick Sanchez, who presumably founded the Sanchez Institute for Doopidoo Research. And that’s just the author list!

As well as Rick and Morty memes, there are a few bonus references thrown in including one of Black Panther. The paper really is a lot of fun. Even the figures, which I assume are repurposed from real data, have something for fans of the show:

So what does this sting mean? As I said after my sting appeared, the point is not that ‘science is fake news’ or that all, or most, scientific journals are like this. These stings are meant to highlight the problem of journals that will publish anything while claiming to be peer-reviewed. A journal that claims to carry out peer review but doesn’t is nothing less than a scam.

The existence of predatory journals is well known, but unfortunately these kinds of outfits continue to thrive, suggesting that the problem is not known widely enough. If even one scientist is saved from paying their money (or public money) to the kind of journal that would publish a Rick and Morty paper, I would say the sting has been a success.