Rewriting fearful memories by bringing them back to mind

Bringing an old memory back to mind would, you might think, strengthen it. But not so - when memories are recalled, they enter a surprisingly vulnerable state, when they can be reshaped or even rewritten. It takes a while for the memory to become strengthened anew, through a process called reconsolidation. Memories aren't just written once, but every time we remember them. 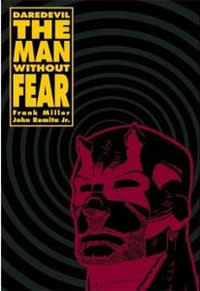 This system allows us to rapidly update our memories with new information, for a more flexible and adaptable brain. It also means that the very act of remembering provides a valuable window of opportunity, during which memory can be manipulated. Now, a group of US scientists have done just that, exploiting this window to remove a simple fearful memory using fresh information, rather than drugs or invasive surgery.

Daniela Schiller from New York University trained volunteers to fear a coloured square by pairing it with a mild electric shock (the "acquisition" part of the graph below). The next day, Schiller reactivated their fear memories by once again showing them the shocking squares. When they did, their skin betrayed their nervousness by becoming better at conducting electricity, a sure sign that they were sweating.

Schiller then tried to extinguish their fearful responses with "extinction trials", where they repeatedly saw the square without any shocks. This procedure ought to break the first day's conditioning and it did temporarily (the "extinction" part of the graph below). But fear memories are harder to banish than that. On the third day, the volunteers were once again exposed to the scary squares, which, once again, sent most of them into a nervous sweat (the "re-extinction" part).

The only exceptions were the people whose memories of their conditioning had been reactivated 10 minutes before they went through the extinction training. If Schiller left a gap of 6 hours, or if she took the recruits straight into the extinction trials, they still reacted nervously to the squares. These results fit with the idea of reconsolidation, where remembering a memory provides a short window of opportunity for overwriting it. Doing so produces an anti-fear blockade that lasts much longer than 24 hours. 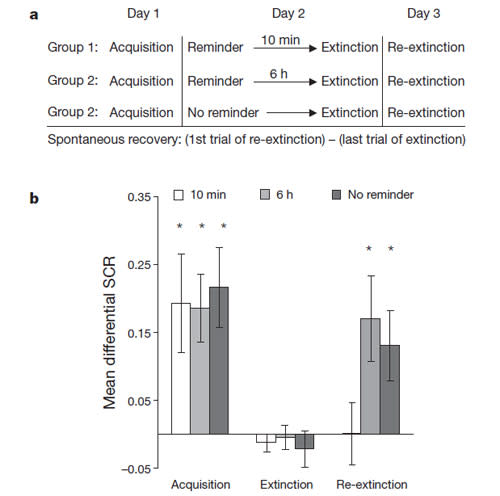 Schiller invited her volunteers back a year later, and 19 out of 65 returned. She gave them four shocks and showed them the coloured squares again - a powerful procedure that should have dramatically reinstated the fears they had been conditioned with a year before. But those whose fear memories had been overwritten didn't succumb, while volunteers who previously belonged to the 6-hour or the no-reminder groups quickly started to get nervous again.

Best of all, Schiller found that the effect of the fear blockade was very specific. In a second experiment, she paired two squares of different colours (CSa and CSb in the graph below) with electric shocks. But she only reminded her volunteers about one of them before trying to wipe their fears away. And as predicted, a day later, only the fear memory that had been reactivated had been eventually blocked. While this is a fairly simplistic scenario, the specific nature of the effect is a must if any realistic application is to come of this one day. In real life, scary memories are associated with many possible triggers and not just coloured squares. 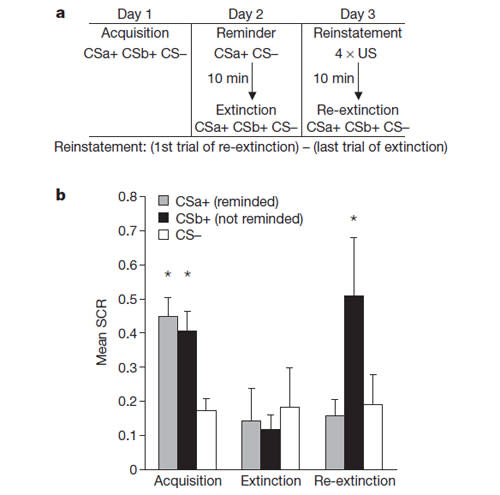 This study is a sequel. Earlier this year, Joseph Le Doux, whose lab Schiller works in, published similar results showing that the same technique was successful in rats. They conditioned rats to link a tone with electric shocks and then erased that memory in the same way that they did for the human volunteers - they reminded the rats of the tone to open the reconsolidation window, and then used the time to overwrite their conditioning using a shock-free tone. As with humans, the timing was crucial.

Other studies have used drugs to the same ends but many of these have been toxic. The only promising drug, the beta-blocker propanolol, was the star of a media circus earlier this year. Merel Kindt showed that propanolol could erase the emotional sting of a fearful memory. The research exploited reconsolidation windows, just as Schiller's study did. By giving propanolol to people before they recalled a scary spider memory, Kindt could erase the fearful response it triggered.

Schiller says that it would be better to use methods that don't involve drugs because of any potential side effects. But Kindt isn't entirely convinced by these new experiments. She told me that a person's sweaty skin tells you about whether they expect something bad to happen but not whether they're afraid of it. In her experiment, she measured fearful responses by looking at the startle reflex - how strongly people blink to the terror in question.

Schiller may have more work to do to convince her critics but, at the very least, her study provides more evidence that reconsolidation is something that could be manipulated to treat anxiety disorders or PTSD. Drugs don't have to be the solution - earlier this year, British researchers showed that playing Tetris can stop traumatic memories from consolidating in the first place. Perhaps the famously addictive game could be used to interfere with reconsolidation too.

Ironically enough, studies like these often provoke fear and panic that they will fall into the wrong hands. Outraged editorials often follow, chiding us that fearful memories are useful things to have because they remind us not to poke that tiger or touch that flame. Indeed, there's evidence that our brain actively protects such memories, shielding them in a net of guardian molecules. Manipulating such systems is to play God with people's mind.

But such criticisms miss the point. For a start, the benefits of remembering fearful experiences can often lead to the extreme drawbacks of anxiety or post-traumatic stress disorder. But perhaps most importantly, the entire point of reconsolidation is to allow the brain to incorporate new data into its existing framework. All these studies are doing is to give it the right information at the right time, nothing more than an advert or a classroom seeks to do.