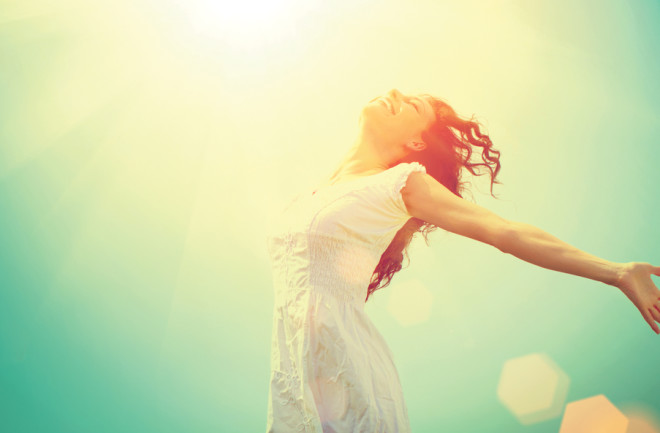 You, too, could be this happy. (Credit: Subbotina Anna/Shutterstock) In 2014, Discoverreported on an equation that purported to lay out key variables that determine how happy we are. It said, in a nutshell, lower your expectations if you want to be happier. But the pursuit of happiness is far more complicated than simply expecting nothing, so it's no surprise that the "happiness equation" has since grown. Now, on top of lowering your expectations, you might want to avoid scrolling through your Facebook newsfeed comparing yourself to other smiling faces. It turns out other people's happiness is now part of that equation.

It's All About Expectations

To write the original equation, researchers from the University College London tracked participants' happiness levels as they played a simple gambling game. They could either win two dollars or get nothing. In another version of the game, they could either lose two dollars or get nothing. They found that people who succeeded in not losing two dollars were much happier than people who failed to win two dollars, even though they all ended up with nothing. Their experiment showed that context matters a lot, and if results exceeded participants' expectations — i.e. they don't lose anything — they were much happier than when they fell short, even if they ended up penniless. Their updated equation takes into account the way other people's fortunes affect our relative happiness. The researchers performed two experiments: In the first, they told participants that they would be receiving a small reward, and asked them how much, if any, they would like to give to a stranger. In the second experiment, they had the same people play a gambling experiment, much like their first study, but this time they could see how much another person won or lost. Again, they were asked how happy they were throughout the experiment. They published their findings Tuesday in Nature Communications.

You Win, I Win, And We All Smile

Although winning made everyone happy, the researchers found that people achieved the most happiness when their partner also won. If their partner lost, there was a noticeable dip in happiness levels. Similarly, people were less grumpy about losing when their partner also lost — schadenfreude, perhaps. Their experiment was only able to measure participants' happiness in the short-term, however. It isn't clear if the effects of positive events stick around long-term, or if we return to an emotional baseline. The researchers identified two primary emotions at work here: guilt and envy. Guilt emerged when one person won, but their partner lost, while envy came into play when one person lost, but their partner won. The researchers say their findings show that inequality is a universal bummer. Misery and delight love company.

If you've ever wondered what happiness looks like, here's your answer. (Credit: Robb Rutledge/UCL)

In addition, the researchers identified differences in how people reacted to winning and losing based on how much money they decided to give away in the first experiment. Those who gave away more money displayed less envy and more guilt when gambling, and vice versa for the stingier among them. This finding might hit on the underlying roles guilt and envy play in our philanthropic decisions. We often donate because we feel guilty, and hoard because we feel slighted. The purpose of the study wasn't necessarily to lay out all of the factors that determine what makes people happy, but to instead find out how our happiness can be affected by others'. It would be nearly impossible to account for all of the things that bring us happiness, but expectations and how much we compare our standing in society relative to others, may underlie the reason we're in a good or bad mood.