Scientist recently found that people can’t avoid unwanted thoughts, but they can limit how unrelenting they become. 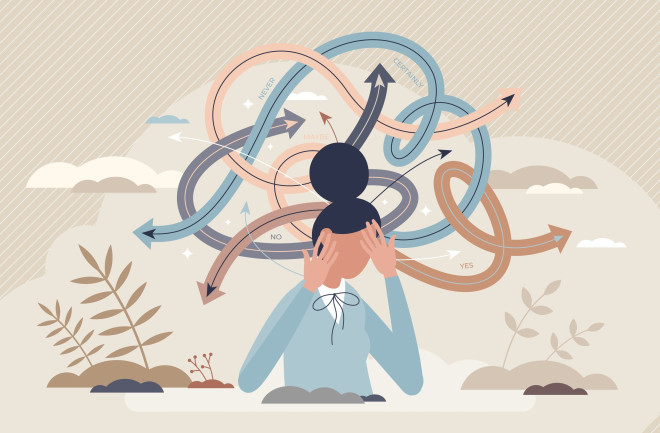 Nagging, repetitive thoughts are the engine for music like Selena Gomez’s, “Back To You” and movies like Jason Segel’s, Forgetting Sarah Marshall. Once the pesky feelings start, they’re hard to stop, and suppressing them just exacerbates the problem.

In a new study, researchers showed that instead of rejecting thoughts after they arrive, we can prevent them from getting there in the first place.

“Reactive control can be particularly problematic because [...] thoughts are self-reinforcing,” says lead author Isaac Fradkin of Hebrew University in Jerusalem in a press release. “However, [...] people can partially preempt this process if they want to ensure that this thought comes to mind as little as possible.”

The researchers tested how people subdue ideas using a word-association task. They gave participants a series of 300 words: 60 unique cues that repeated themselves five times in random order. Respondents then provided a closely associated word, like a game of Anomia. If the cue was “table,” for example, you could respond with “chair.” Although the task seems arbitrary, it simulates natural associations that we make, like when we hear a song and are reminded of an ex.

They told half the participants that they weren’t allowed to repeat their responses. If they replied “chair” the first time they heard “table,” they needed to respond with something different the next time, like “desk.” If they failed, the researchers said they would cut their payment.

The team compared response times between these individuals who suppressed repetitive thoughts, to a control group who were allowed to repeat answers. Suppressed individuals took longer to provide a new association for repeated cues compared to the control ones. They’re delayed because they want to repeat their first answer, but have to reject and replace it, the researchers say.

“Although people could not avoid unwanted thoughts, they could ensure that thinking an unwanted thought does not increase the probability of it coming to mind again,” Fradkin says in a press release.

The findings show what people can and can’t do to avoid unwanted thoughts, the researchers say. Fighting your mind’s natural associations could help you win a game of Taboo or prevent you from dwelling on a harsh breakup whenever you hear a crooning Taylor Swift song.

But it could also have more profound implications. For starters, creating unique associations could be the psychological mechanism for creativity. Similar studies could ask if people who think outside the box are better-equipped to break free from these mental constraints.

The researchers also say that some psychiatric diseases inhibit a person’s ability to control intrusive thoughts. The experiments and models could highlight the neural pathways that hinder thought control in clinically diagnosed patients.