Our study and work sessions likely benefit from some tunes, though individual preferences may produce varying outcomes. 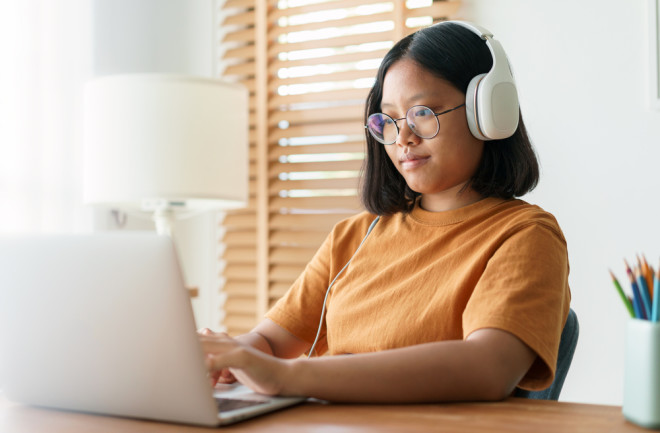 When the pandemic began, my best friend and I began gathering for remote work sessions. In between meetings and interviews, she would prefer background noise in the form of music or low-volume television. While I had been accustomed to working in silence, she says music helps her focus. It seems she’s not alone — YouTube videos featuring focus-oriented songs have racked up millions of views.

Music is powerful, after all: It has been found to relieve stress, reduce high blood pressure and strengthen relationships. While work or study sessions can feel isolating and boring, science has also shown that music could keep you alert and productive.

How Music Boosts the Brain

Listening to music won’t make you a genius, but science shows it may boost cognition: A small study published in 2010 found that listening to fast-tempo music could help people process information faster and apply it correctly.

Individuals across age groups may reap these benefits. In 2016, researchers reported that background music allowed children to write more fluently than those who wrote their essays in silence. In older adults, background music has been demonstrated to improve performance when processing new information.

Music’s influence on information processing and memory may be associated with the activation of specific neural pathways. By scanning people’s brains as they memorized words, researchers found that hearing tunes may have encouraged more word chunking, or dividing a word into familiar parts, compared to silence. This process makes it easier to retain information. Brain scans also revealed decreased activity in the prefrontal cortex when listening to music, which suggests music eases the burden of retrieving music-related episodic memories, according to the 2015 study.

What’s more, a Spotify session can help keep you on task. “When you’re listening to something, it helps you regulate your thoughts and take your mind off of the things that [you] may otherwise be preoccupied with,” says William Schroeder, a counselor who co-founded Just Mind Counseling in Austin, Texas. Since music can turn on several brain networks simultaneously, he explains, it not only jogs our memory but can also activate brain areas involved in concentration, pleasure and motivation.

There is likely no ideal genre of music to enhance work productivity, and it all seems to depend on individual preference. Schroeder’s clients listen to a variety of music, from rap to the Harry Potter soundtrack, when engaged in intellectually demanding tasks. Schroeder says some of his clients motivate themselves to work with upbeat pop music.

For those who have trouble staying on task or are easily distracted, he suggests mellow or calming songs. “We call it a compensatory strategy that may be used in place of stimulants or caffeine where people are pumping themselves up to go back in and get on task.” If you decide to take a break, listening to calming music could re-orient you toward a working mindset.

And although it’s tempting to press play on your favorite artist’s new album, the lyrics could eat up your attention. Such distractions take up a good chunk of time — the average person requires about 15 minutes to get back on task, according to Harvard Business Review. Even minor interruptions, such as a radio ad, could lead you astray. To avoid distractions, Schroeder suggests choosing music that is not actively engaging.

“My personal advice for people is to use a device that can be set to Do Not Disturb mode, whether that’s your phone, laptop or Apple TV. If you’re home alone, avoid songs with words or commercials, or music that stimulates memories that may pull you off task.”

You don’t even need to play a song, it turns out. Listening to white noise or nature sounds can mask any nearby distractions and help you learn. In one experiment, white noise helped adults recall new phrases more accurately than people who learned the words in silence. White noise, or even ASMR, can also reduce anxiety over a deadline, according to Schroeder.

When tackling assignments that require critical thinking or memorization, lyric-free songs may be less distracting. And while the Mozart effect — which claims that listening to classical music increases one’s general intelligence — has been largely debunked, there is some scientific evidence suggesting classical music is useful when learning new information. College students who listened to classical music while observing a college lecture and later fell asleep while hearing the same songs demonstrated an 18 percent improvement in remembering concepts the next day.

Why listen to music at all? Sure, music has its advantages, but there aren’t not necessarily any disadvantages to working in silence. As it turns out, tunes may be better for some than others. Research published in 2017 suggested that music is more beneficial to people with higher working memory capacity.  Other work has also demonstrated how the impact on brain power can vary between individuals.

Your preference for music might also change within a single session. You might start off with a playlist when writing an essay outline to get the creative juices flowing, but later turn it off to concentrate on more in-depth writing.

Schroeder says he tells his clients to view their situation like a salad bar, since there’s many ingredients to choose from as you work. You might start off making a Greek salad and later mix and match to accommodate your taste. “We may notice that there are different tasks that are harder to start, and with trying different strategies for listening to music, they may become easier over time.”

Try experimenting with different sounds and pay attention to what works for you. Since my early pandemic sessions, I have even grown to prefer background music while working — my coffeehouse playlist set the soundtrack as I wrote this article.