Reporting back from a hotel in midtown Manhattan, having made it through the Colbert Report basically unscathed. In fact the experience was great from beginning to end. Update: here is the clip.

Monday morning I talked on the phone with Emily Lazar, a researcher for the show. I was really impressed right from the start: it was clear that she wanted to make it easy for me to get across some substantive message, within the relatively confining parameters of what is basically a comedy show. From start to finish everyone I dealt with was a consummate pro.

We got picked up at our hotel in a car that brought us to the Colbert studio, and hustled inside under relatively high security — people whispering into lapel microphones that we had arrived and were headed to the green room. Very exciting. The green room was actually green, which is apparently unusual. I got pep talks from a couple of the staff people, who encouraged me to keep things as simple as possible. They made an interesting point about scientists: they make the perfect foils for Stephen’s character, since they actually rely on facts rather than opinions. 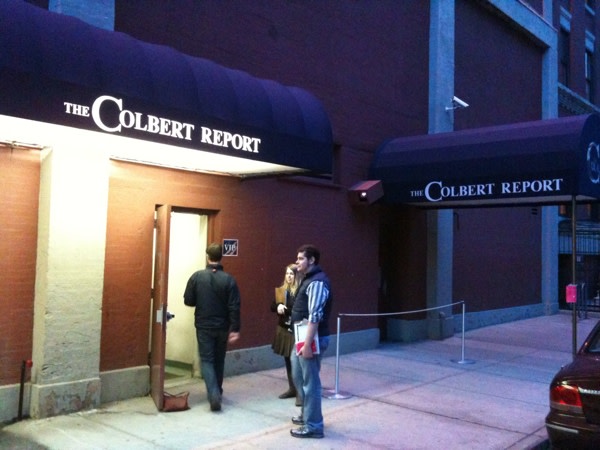 Stephen himself dropped by to say hi, and to explain the philosophy of his character — I suppose there still are people out there who could be guests on the show who haven’t ever actually watched it. Namely, he’s a complete idiot, and it’s my job to educate him. But it’s not my job to be funny — that’s his bailiwick. The guests are encouraged to be friendly and sincere, but not pretend to be comedians.

We got to sit in the audience as the early segments were taped, which were hilarious. I feel bad that my own interview is going to be the low point of the show, laughs-wise. But I went out on cue, and fortunately I wasn’t at all jittery — too much going on to have time to get nervous, I suppose.

I had some planned responses for what I thought were the most obvious questions. Of which, he asked zero. Right off the bat Colbert managed to catch me off guard by asking a much more subtle question than I had anticipated — isn’t the early universe actually very disorderly? That would be true if you ignored gravity, but a big part of my message is that you can’t ignore gravity! The problem was, I had promised myself that I wouldn’t use the word “entropy,” resisting the temptation to lapse into jargon. But he had immediately pinpointed an example where the association of “low entropy” with “orderly” wasn’t a perfect fit. So I had to go back on my pledge and bring up entropy, although I didn’t exactly give a careful definition.

As everyone warned me, the whole interview went by in an absolute flash, although it really lasts about five minutes. There was a fun moment when we agreed that “Wrong Turn Into Yesterday” would make a great title for a progressive-rock album. Overall, I think I could have done a better job at explaining the underlying science, but at least I hope I successfully conveyed the spirit of the endeavor. We’ll have to see how it comes across on TV.

I shouldn’t end without including some good words about the bag of swag. Not only does every guest get a goodie bag that includes a bottle of excellent tequila, it also includes a $100 gift certificate forDonors Choose. How awesome is that?

And as we left the studio, there were some young audience members lurking around hoping for a glimpse of the great man himself. They had to settle for me, but they sheepishly asked if I would pose for a picture with them. Not yet having perfected my diva act, I happily complied. I hope they take away some great memories of the night.