I was at ASHG this week, so I've followed reactions to the election passively. But one thing I've seen is repeated commentary on the fact that Asian Americans have swung toward the Democrats over the past generation. The thing that pisses me off is that there is a very obvious low-hanging fruit sort of explanation out there, and I'm frankly sick and tired of reading people ramble on without any awareness of this reality. We spent the past few months talking about the power of polls, and quant data vs. qual (bullshit) analysis, with some of my readers going into full on let's-see-if-Razib-is-moron-enough-to-swallow-this-crap mode.

In short, it's religion. Barry Kosmin has documented that between 1990 and 2010 Asian Americans have become far less Christian, on average. Meanwhile, the Republican party has become far more Christian in terms of its identity. Do you really require more than two sentences to infer from this what the outcome will be in terms of how Asian Americans will vote? 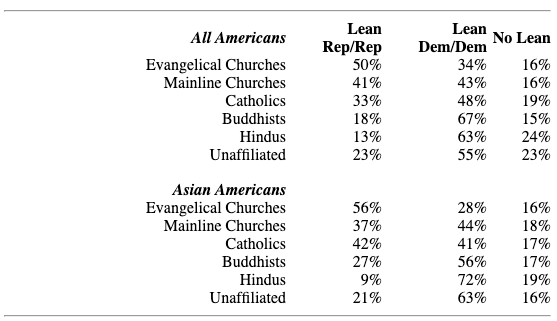 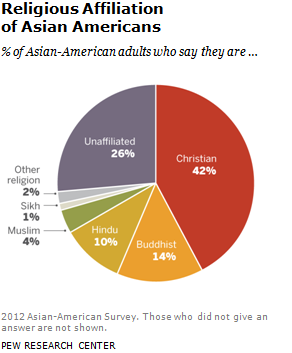 These data may not explain all the variation between then and now (the two causal factors being the growing identification of the Republican party with Christianity, and the growing non-Christianity of Asian America), but they can explain most of the variation. In other words, if you want to present another model, show me the data. I don't care about your opinion or intuition. Intuition is another word for private bullshit. There is social science out there that doesn't require an esoteric regression model. It's not even in the class of a non-obvious prediction. Rather, the description screams out at you. It's aggravating that people can't be bothered to find this stuff when they can be bothered to subject me to long ramblings and ruminations.