A correspondent forward me this paper, The intelligence-religiosity nexus: A representative study of white adolescent Americans:

The present study examined whether IQ relates systematically to denomination and income within the framework of the g nexus, using representative data from the National Longitudinal Study of Youth (NLSY97). Atheists score 1.95 IQ points higher than Agnostics, 3.82 points higher than Liberal persuasions, and 5.89 IQ points higher than Dogmatic persuasions. Denominations differ significantly in IQ and income. Religiosity declines between ages 12 to 17. It is suggested that IQ makes an individual likely to gravitate toward a denomination and level of achievement that best fit his or hers particular level of cognitive complexity. Ontogenetically speaking this means that contemporary denominations are rank ordered by largely hereditary variations in brain efficiency (i.e. IQ). In terms of evolution, modern Atheists are reacting rationally to cognitive and emotional challenges, whereas Liberals and, in particular Dogmatics, still rely on ancient, pre-rational, supernatural and wishful thinking.

If you read this weblog you know I have touched upon this topic before. Here are the titles of some of the posts, Religious people are less intelligent, Heritability of religiosity, Biblical literalism or low IQ: which came first?, Educational levels & denomination, Pentecostals are stupid? Unitarians are smart? and Higher IQ ~ more atheism internationally. Obviously I've talked about this issue. I happen to be one of those people interested in religion, and, who believes in IQ. Most intelligent people don't happen to actually believe in intelligence, so there's a lot of interesting low hanging quantitative data there for anyone willing to poke around and cross-reference. As someone who has long conversations with people at Unitarian-Universalist churches and at InterVarsity Christian Fellowship meetings, these data aren't particularly world-shaking. So you're wondering who is smart and who isn't, right? (even if you don't believe in IQ) Here's the chart: 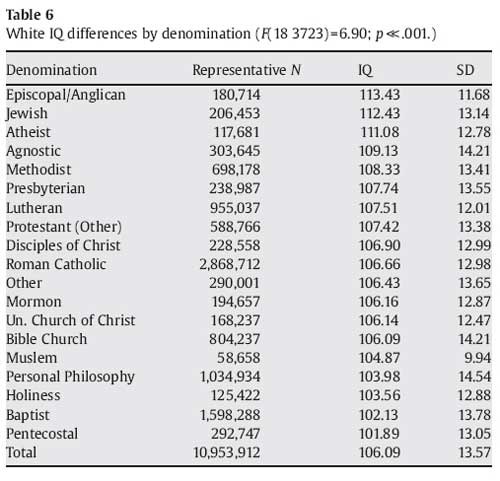 You'll see a rough correspondence with the contentions I offered in my posts. The rank order shouldn't shock you.

I don't put that much stock in the standard deviation differences for all these groups. Look at the N's (remember these were youth from the NLSY sample). This isn't to say that you should discard these inferences as some of you will want to based on the N's; look at my previous posts and you'll see data which supports much of this rank order, and the differences between some classes are very large. I only mention the standard deviation issue because it is a point of discussion in the paper itself. In any case, you might notice a few peculiarities. The spelling of "Muslem" for example; the author is Danish, so that's a minor issue. But, the racial breakdown for "Muslem" is wrong, at least for the general population. The racial breakdown for the other groups looks correct, so I don't know what happened here. The Pew Religious Survey has the details, but only about 30-40% of Muslims in the United States are "white" (which includes individuals of Middle Eastern origin), though this paper contends that 85% are. Additionally, the "Un. Church of Christ" is coded as "Dogmatic" in the paper. To me, "Un." would imply "United," as in United Church of Christ. This is in fact the most liberal Christian denomination in the United States. The Church of Christ on the other hand is moderately Fundamentalist. I suspect there was a confusion somewhere. Some of you might not be aware of how IQ distributions look. I decided to assume that the standard deviation was 13, and graphed a few of these denominations and did a little editing in Adobe Illustrator. The opacity causes some issues on the "left half" of the bell curve, but just look at the overlaps on the "right half." 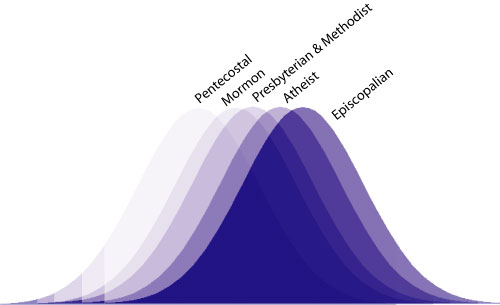 Finally, I thought I would address this:

...In terms of evolution, modern Atheists are reacting rationally to cognitive and emotional challenges, whereas Liberals and, in particular Dogmatics, still rely on ancient, pre-rational, supernatural and wishful thinking. 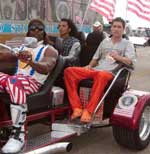 There's some evolutionary talk in the paper, but I'm rather skeptical of it. I happen to think that religious cognition is the human norm, and that very high IQ individuals who have a naturalistic worldview are deviant. Those are just the numbers. Since intelligence is a normally distributed trait on a priori grounds you assume it has not been subject to strong unidirectional selection for any period of time. Perhaps there is a frequency dependent dynamic at work (that's my suspicion). In any case, intelligent people are evolutionarily being selected against right now, so I'd rather avoid language which depicts the religious as older models doomed to extinction.