Radar May Keep Bats Away From Wind Turbines’ Blades 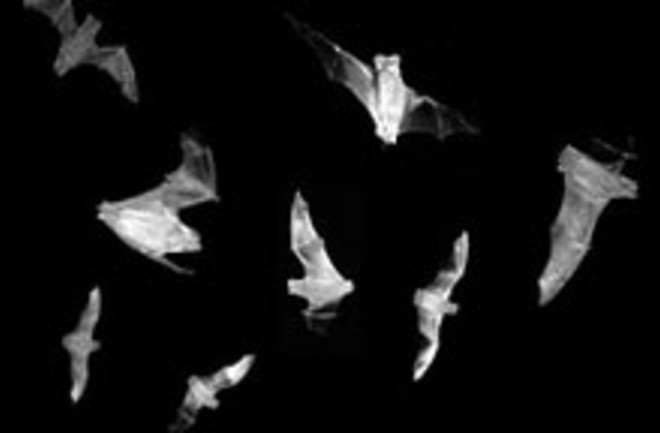 Wind power may prove to be a promising source of clean energy, but it can also be deadly to bats. Not only can the animals be sliced by the blades of wind turbines, but the sudden drop in air pressure around the turbines can also cause bats' lungs to explode. An electromagnetic field emitted near the turbines, however, may help bats steer clear of them, according to a new study published in the Public Library of Science One. Bat casualties near wind turbines have proven to be significant: In 2004, over the course of six weeks, roughly 1,764 and 2,900 bats were killed at two wind farms in Pennsylvania and West Virginia, respectively

. If wind power continues to become increasingly prevalent, so too might the turbines become a growing threat to bat populations. "Given the growing number of wind turbines worldwide, this is going to be an increasing problem, no question about that," said [co-author] Paul Racey

A wind farm in Texas currently uses radar to keep birds away from the turbines, and others have painted their blades to repel birds. But efforts to repel bats, such as the implementation of devices that produce "white noise" near the turbines, have proven futile to keeping bats away, most likely because these sounds are too subtle to keep bats out of the entire area covered by the blades. So scientists decided to try repelling the bats using a radar. In the study,

one method employs a rotating antenna similar to those used in air traffic control - bats are known to avoid these large installations and the researchers hoped to replicate the effect with a smaller device. The team also tested a stationary antenna that used two different radar signals that used different pulse lengths [The Guardian]. The signals from the fixed antenna were most effective, and caused bat activity to drop nearly 40 percent in the area 30 meters from the radar. The bats behaved normally after the test, flying back into the area once the researchers turned the radar off.

Since bats navigate by sending out sound waves in a process called echo-location, it's not clear why they're deterred by radar, which uses radio waves, a type of electromagnetic wave. The researchers say the electromagnetic field emitted by the radar may produce a sensation that deters the animals. Radar signals can lead to small but rapid spikes of heat in the head that generate sound waves, which in turn stimulate the ear. "A bat's hearing is much more sensitive than ours," Racey noted. "It may be so sensitive that even a tiny amount of sound caused by electromagnetic radiation is enough to drive them out of there"

[LiveScience]. The next step in the research? Honing this technique to keep 80 to 90 percent of bats from flying into the turbines.

Related Content: 80beats: Tiger Moths Jam Bats’ Sonar Like a Helicopter in Enemy Territory 80beats: The Original Bat-Signals: Bats Can Recognize Individual Voices 80beats: Scientists Glean Secrets of Flight From Birds, Bats, and Bugs 80beats: Space Heaters in Caves Could Protect Bats From Mysterious Disease 80beats: Bats Are Dying From White Nose Mold, But Researchers Don’t Know Why The Loom: How to Be a Bat [with high-speed video]