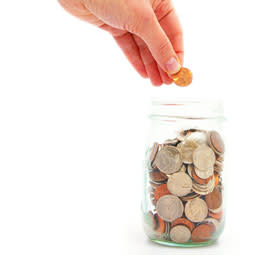 Selfishness is good for us---thinking “me (and my relatives) first” lets humans ensure their survival and that of their genes. But generosity can be good, too; it binds humans into safe communities. So if both behaviors are beneficial, which one dominates? A new Nature paper

suggests that it all comes down to timing: when we have to make a fast decision, we act more generously than when we have time to think about our choices. Harvard researchers recruited subjects from around the world via a crowdsourcing website

. Then they tested the participants' cooperation with a few economic games. Split into groups of four, people received 40 cents and a request: choose how much to put into a group fund. The communal cash would be doubled and then evenly shared amongst the whole team. If you donate a lot, everyone in the group will make more money. But if you're stingy, you'll keep your own cash and still manage to freeload off of the more generous group members. And the choice to act for the group or the individual's benefit was linked to how much time people spent thinking. When subjects made their decision more quickly, they tended to donate a larger share of their own money. To further test the link between a fast decision and greater cooperation, the researchers recruited another batch of volunteers and had them play a similar game, but with either a time pressure or a time delay. In the time pressure scenario, the participants had to make their decision within 10 seconds. Under time delay conditions, they had to wait and think for 10 seconds before choosing how much to donate. Consistent with the original test, time-pressured participants gave more money while the time-delayed condition made them more miserly. Even when participants received $4 instead of $0.40, they continued to make generous fast decisions. The authors suggest that, since we rely on our gut instincts to make fast decisions, generosity is our intuitive response, while the reflective response, which we develop after taking time to think, is selfishness. "On the basis of our results," they write

, "it may be tempting to conclude that cooperation is ‘innate’ and genetically hardwired, rather than the product of cultural transmission. This is not necessarily the case: intuitive responses could also be shaped by cultural evolution and social learning over the course of development."

Image of money jar via Shutterstock