Are the eyes the windows to intelligence? In an interesting paper, Georgia psychologists Jason S. Tsukahara and colleagues report that there’s a positive correlation between pupil size and cognitive ability.

It’s well known that our pupil size varies over time due to changes in both emotional state and cognitive ‘effort’. As Tsukahara et al. put it

Starting in the 1960s it became apparent to psychologists that the size of the pupil is related to more than just the amount of light entering the eyes. Pupil size also reflects internal mental processes. For instance, in a simple memory span task, pupil size precisely tracks changes in memory load, dilating with each new item held in memory and constricting as each item is subsequently recalled.

However, Tsukahara et al. are saying that there’s relationship between pupil size and cognitive ability across individuals. Here’s the key figure showing the correlation between baseline (resting) pupil diameter and fluid intelligence (Gf) in n=331 volunteers. Fluid intelligence is thought to be a major component of IQ. As you can see, the association is present in each of the three ethnic groups studied: 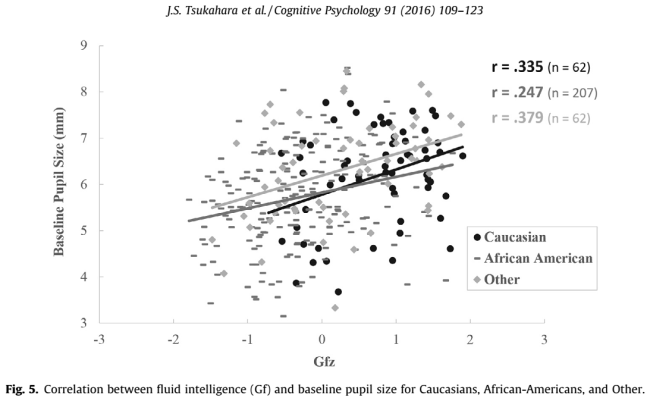 In additional experiments, Tsukahara et al. show that baseline pupil size is a reliable measure, staying more or less constant within the same individual over repeated test sessions (r>0.7); and that the correlation with intelligence can’t be explained by some confounding variables such as age, gender, or nicotine and caffeine consumption.

Now, when I first saw this paper, I was sure there had to be something wrong with Tsukahara et al.’s methods. Indeed, you might say I rolled my eyes, because it seemed ‘too good to be true’ that a measure as simple as pupil size would correlate with something as nebulous as IQ. But after reading the paper, I actually haven’t been able to spot any flaws… although perhaps my readers will.

Assuming the association is real, what is the cause of it? Tsukahara et al. speculate that the neurotransmitter norepinephrine might be the link between the pupils and intelligence:

Although we did not obtain any direct neural measures of brain function, neuroscience research has shown a close association of pupil size with activity in the locus coeruleus-norepinephrine system. [In the brain, norepinephrine] modulates the gain of target neurons to be more sensitive to incoming signals (both excitatory and inhibitory)… this modulation of neural gain has an effect on the strength of functional connectivity throughout the brain.

In other words, maybe people with higher trait norepinephrine signalling have both larger pupils and more efficient neural information processing as a result. I must admit that this seems rather too simplistic to me, but again, I can’t really point to anything wrong with this logic specifically.