Psychopaths May Be Immune to Contagious Laughter 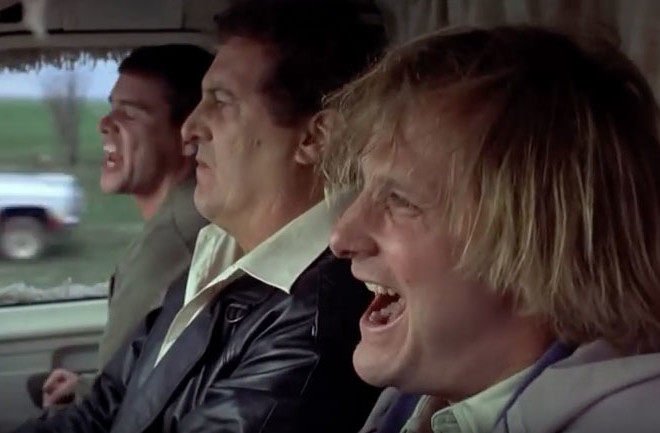 (Credit: Screengrab/YouTube) Having a good laugh is, among other things, a great way to bond socially. In fact, we’re much more likely to crow when we’re with other people than we are when we’re alone. And once you hear someone start, it’s hard not to crack up, too. However, a recent study in the journal Current Biology posits that this phenomenon might not be contagious for everyone, specifically for teen boys at risk of psychopathy. Elizabeth O’Nions of the University College London and her team tested three groups of boys aged 11-16. The first — the control group — was made up of 31 boys who were developmentally typical; a second group consisted of 32 boys who displayed disruptive behaviors and high-callous traits that indicate a risk of developing psychopathy; the final group had 31 boys who also displayed disruptive behaviors but low-callous traits. Each cohort was asked to listen to a recording with actual, genuine laughter, fake laughter and also crying sounds. While they were listening, the researchers took fMRI brain scans of each boy. After the scans, the kids answered questions about the recording, such as, “How much does hearing the sound make you feel like joining in and/or feeling the emotions?” and “How much does the sound reflect a genuinely felt emotion?” and rated them on a scale of one to seven.

O’Nions and her team had predicted the two groups of antisocial boys wouldn’t react as strongly to genuine laughter, both in their answers and in the activity of the relevant “premotor” and “motor” brain areas — the parts of the brain that get us ready to join in a giggle fit and the ones that make it happen. And sure enough, compared to the control group, both of the other two sets of boys had lower levels of brain activity in these regions. Yet only the kids in the high-callous trait group, the ones at risk of psychopathy, were less likely to say they felt like joining in on the laughter they heard — those in the low-callous trait cohort were just as likely to want to laugh as the developmentally typical boys. The authors argue it’s possible the high-callous kids’ atypical processing of laughter could actually up their psychopathy risk, since they’re more likely to miss out on such a common and important way to bond with others. Or, maybe, people just aren't funny.