Prosthetic Limbs: Not Just Peg Legs and Hooks Any More 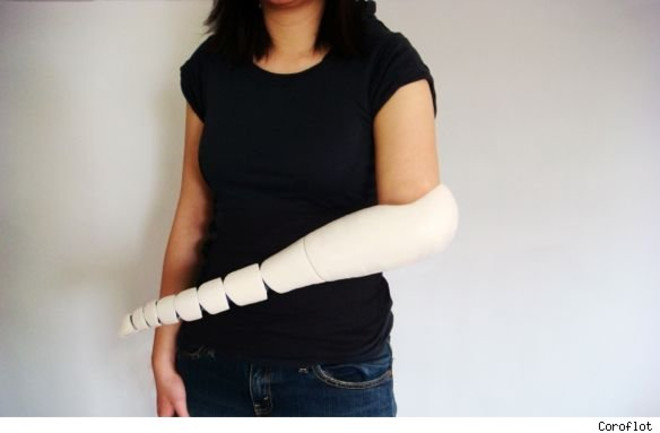 OK, so---whoa. Anyone wielding designer Kaylene Kau's prosthetic tentacle would certainly become the instant favorite of any Elder Gods she met. But aside from it's ability to preserve her from being eaten by Cthulu, Kau's prosthetic tentacle abandons a way of thinking about prosthetics --- that they have to replicate the lost limb as exactly as possible ---- for something simple, usable, and elegant. Instead of a massively complicated set of servos, gears, and microchips the user manipulates the tentacle through two switches: One tightens a cord, causing the tentacle to curl and grip an object, the other lets it go. It's primarily designed as an aid in conjunction with a biological arm, but it can grip large and small objects effectively. The arm can join a suite of prosthetic limbs that are changing the way medicine and the rest of us think about replacing a lost limb. Last year, New Zealander Nadya Vessey, who's missing both legs, asked special effects company Weta (all three Lord of the Rings movies) to make her a mermaid prosthetic she could use for swimming. They needed eight staff members and two and half years, but they did it, and now Vessey swims in the ocean with her fin.

Aimee Mullins, an actress, model, and athlete, has been rethinking legs for years. Mullins was born without calf bones (her fibulae, to be specific) and has had to function with artificial limbs her whole life. After achieving success as a track and field athlete, she gave a TED Talk, which launched her in a new direction. Instead of using limbs for utilitarian purposes only, she began to work with designers to bring art into the limbs. In 1999, designer Alexander McQueen built her carved wooden legs that look exactly as if she were wearing boots, and in 2002 Matthew Barney gave her transparent plastic legs for his Cremaster Cycle. Mullins soon realized her legs could be worn as objects of beauty, and as fashion accessories. These days, she has 12 pairs of legs, some of which allow her to change her height in a five-inch range between 6' 1" and 5' 8" (her usual height). In a TED talk she gave last year, Mullins told a story about a friend who was actually jealous of her ability to change her height. Science is laboring to provide other advantages to those with prosthetic limbs, including the possibility of running faster, jumping higher, and being stronger than the biological originals. No doubt my SNF colleague Kyle Munktrick approves. Not that we should get too carried away with the advantages of replacement limbs. Blogger Jon Kuniholm lost an arm in Iraq. He writes that when someone tells him his prosthetic arm his cool, he answers, "No it's not. When it's good enough that you want an elective amputation, then it'll be cool."