A Swedish company called Emotra make a device to detect someone's risk of suicide based on measuring the body's autonomic responses to certain sounds. It's called EDOR®. 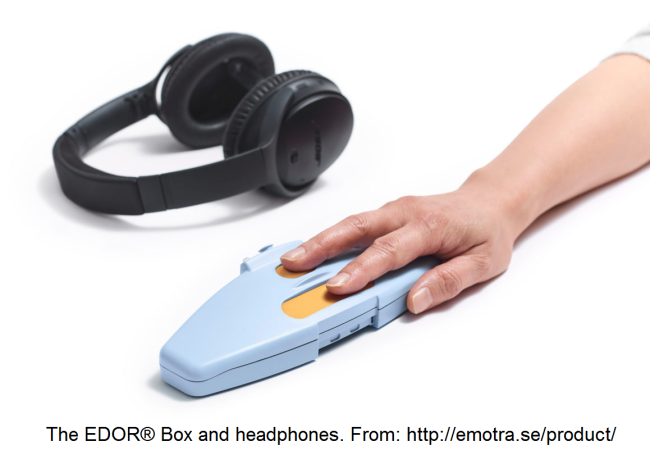 I've been blogging about this machine for the past 18 months (1, 2, 3) because such a product, if it worked, would be very important. It could help save countless lives. Unfortunately, I don't think EDOR® has been proven to be effective. As I've argued in my previous posts, the evidence just isn't there yet. Now, it seems that the Emotra company's own academic collaborators have come to the same skeptical conclusion. In a 'Consensus Statement' released a month ago, researcher Marco Sarchiapone, who was the head of EUDOR-A, the largest ever study of EDOR®, wrote that

At present, the results of this study do not allow to recommend the use of EDOR as a method to identify patients at risk for suicide. Further research is required to investigate the value of EDOR in the assessment of suicide risk in the specialist clinical setting and to recommend its use.

Sarchiapone's negative conclusion regarding the efficacy of EDOR® was based on the results of EUDOR-A showing that the test did not predict suicide deaths:

Regarding completed suicide, the prevalence among hyporeactive patients [those predicted to be at high risk of suicide] was 0.9% vs. a prevalence of 0.58% among normally reactive [low risk] patients. These results were not statistically significant...

The Emotra company were not happy with this statement, releasing a response to make clear that Sarchiapone was only speaking for himself:

Emotra has learnt that an individual researcher, on his own initiative, has written and disseminated a revised so-called consensus statement that purports to summarise the conclusions which can be drawn from the results of our EUDOR-A study. Emotra must therefore point out that no new consensus meeting has been held and that this new statement should be interpreted as that individual researcher’s personal views...

Nonetheless, it is clear that all is not well in the world of Emotra. There will surely be plenty to talk about at Emotra's upcoming Annual General Meeting. This isn't to say that EDOR® is completely useless. Sarchiapone notes that the test was able to predict suicide attempts better than chance, and given the large sample size of the EUDOR-A study (n=1573) this is quite convincing evidence. The problem is that the prediction was only somewhat accurate: Sarchiapone states a sensitivity of 36% and a specificity of 77% for suicide attempts, meaning that 2/3 of suicide attempters had been wrongly classed as 'low risk'. But this should come as news to no-one, because previous large studies of the technology behind EDOR® also found it to work just a bit better than chance, but not by much. Overall it's hard to escape the conclusion that EDOR® is a technology which does have some real promise but which has been commercialized and rushed to the market far too early, by people who should have known better.