This time last year I wrote(1,2) about a Swedish company called Emotra. Emotra make a device that is supposed to measure suicide risk in people with mental illness. The test is called EDOR® and according to Emotra’s website and materials, it has been shown to be highly effective. Last year, I explained why I disagree with that assessment. 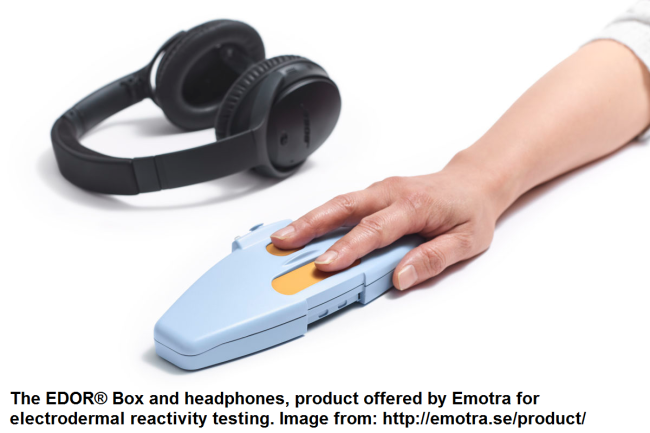 Now, a year later, I’m revisting the EDOR® story, because there have been a number of developments that I find quite disturbing. It seems that EDOR® has now found users and is, or soon will be, in actual commercial use in a number of hospitals.

The use of EDOR® began in March with an unnamed psychiatric clinic in Warsaw, Poland, who agreed to “borrow the instrument and pay Emotra for test analyses”. In October, a German psychiatric hospital signed up to a similar agreement. Then, a month ago, EDOR® came right to my own doorstep with the announcement that a hospital in London will be trialling the device:

As Emotra announced in a press release on November 16, a letter of intent has been signed with a London-based psychiatric hospital. The agreement will allow the hospital to evaluate EDOR® in clinical practice for a limited period of time. This evaluation was commenced in the past few days with the training of the physicians and test leaders involved.

Last Wednesday, EDOR was also presented to the board of directors of the company that owns this London hospital. The evaluation that is now in the starting blocks could potentially open the door to other hospitals owned and run by this company.

Overall, while Emotra don’t seem to have actually sold any EDOR® hardware to anyone yet, the technology seems to be on the threshold of entering clinical practice.

This worries me because I don’t think the evidence base is strong enough yet to justify using this method clinically. For instance, in 2013 a large study, carried out by EDOR® inventor and Emotra head of research Lars-Håkan Thorell, was publishedwith unimpressive results.

The 2013 paper showed that electrodermal hyporeactivity testing, the technique behind EDOR®, is not much better than chance at predicting suicide or violent suicide attempt. In particular, the method produced a large number of false positives i.e. it had low specificity. (Thorell et al. tried to redefine the word ‘specificity’ to deal with these results, something Emotra is still doing to this day on their website.)

Thorell recently published a new paper claiming much better performance for electrodermal hyporeactivity tests: “The relationship between electrodermal hyporeactivity and suicide was highly statistically significant (p = 0.00058) and the risk of suicide was 25 times higher among hyporeactive than reactive depressed patients.” This sounds like an impressive set of results, but the study was very small: the total number of suicides was only 10. It’s also not reassuring that this paper was published by notorious predatory publishers ECronicon.

This isn’t to say that EDOR® is a bogus technology. There is quite a lot of research on electrodermal hyporeactivity and I wouldn’t be surprised if it can predict suicide to some extent. The problem is that we don’t know that extent. I don’t think we know the accuracy of EDOR® well enough to be confident that it is safe or cost-effective.

Predicting suicide is not an academic exercise. Even if a test is (say) 80% accurate, what happens to the 20% of patients who are incorrectly assessed? What about the patient, actually not suicidal, who is treated as if they are? What happens to the suicidal patient who is wrongly classed at being of low risk? Disturbing scenarios suggest themselves.

Emotra’s CEO says in a statement that:

In our opinion, EDOR® is a mature product that has proven itself amply in clinical practice and, therefore, the time is ripe for a commercial launch of the method.

In my opinion, this is highly optimistic.