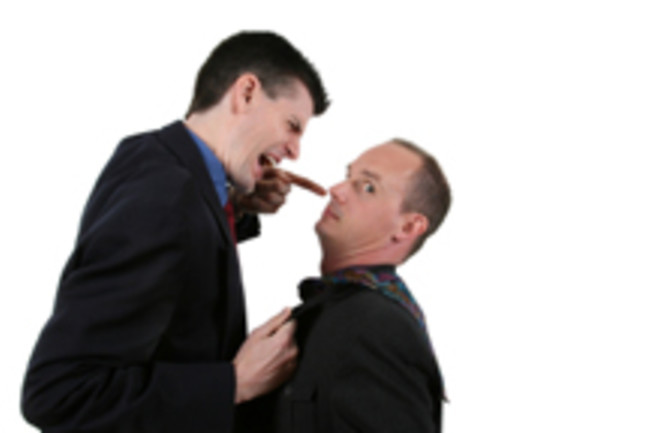 Here's some gratifying news for any employees out there who are feeling bullied by a tyrannical boss: That aggressive behavior may have little to do with you, and a lot to do with your boss's feelings of incompetence. A new study in Psychological Science found that when managers are made to feel insecure about their job performance, their aggressiveness skyrockets.

"Power holders feel they need to be superior and competent. When they don't feel they can show that legitimately, they'll show it by taking people down a notch or two" [New Scientist],

says study coauthor Nathanael Fast. The researchers got 410 volunteers from various workplaces to fill out questionnaires about their position in the workplace hierarchy, how they felt about their job performance, and their aggressive tendencies. They also conducted a series experiments on the volunteers. In one, they manipulated the subjects'

sense of power and self-worth by asking them to write about occasions when they felt either empowered or impotent and then either competent or incompetent. Previous research has suggested that such essays cause a short-term bump or drop in feelings of power and capability [New Scientist].

Next they asked the volunteers to set the level of punishment for (imaginary) university students who got wrong answers on a test. Those people who felt more powerful and more incompetent picked the harshest punishments, the study found. So what's to be done with a bullying boss? Coauthor Serena Chen says a little ego stroking may make life easier for everyone.

"Make them feel good about themselves in some way," Chen said, suggesting this might mean complimenting a hobby or nonwork activity provided it is "something plausible that doesn't sound like you're sucking up" [San Francisco Chronicle].

Related Content: 80beats: Teenage Bullies are Rewarded With Pleasure, Brain Scans Show DISCOVER: So, You Want to Be the Boss?Image: iStockphoto