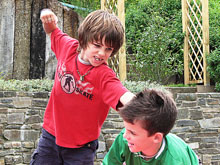 It's no fun being bullied, but new research supports what many teenagers have long suspected: A victim's pain may be a bully's gain. A new brain imaging study of aggressive teenage boys found that watching others being bullied triggered parts of their brains associated with pleasure. "It is entirely possible their brains are lighting in the way they are because they experience seeing pain in others as exciting and fun and pleasurable,"

The study subjects were 16 boys 16 to 18 years old, half of whom had aggressive conduct disorder and half of whom had no behavioral disorder. While their brains were hooked up to functional MRIs, the boys were shown video clips of people getting hurt either by accident, such as having a heavy object dropped on their hands, or by intentional actions by others, such as someone stomping on their feet.

Lahey said he expected an emotionally indifferent response to pain from subjects with conduct disorder, a mental disorder characterized by aggressive, destructive or harmful behavior towards other people and animals and can include theft, substance abuse and sexual promiscuity, according to the American Academy of Child and Adolescent Psychiatry. Instead, fMRI scans showed a strong but highly atypical emotional response [ABC News].

The aggressive group was not apathetic to the suffering of others, but actually seemed to derive sadistic pleasure. "Aggressive adolescents showed a specific and very strong activation of the amygdala and ventral striatum (an area that responds to feeling rewarded) when watching pain inflicted on others, which suggested that they enjoyed watching pain," said [co-author] Jean Decety.... Unlike the control group, the youth with conduct disorder did not activate the area of the brain involved in self-regulation (the medial prefrontal cortex and the temporoparietal junction) [LiveScience].

While bullying is common during adolescence, conduct disorder only affects 1 to 4 percent of the teenagers, most of them boys. The researchers caution that the study focused on boys with conduct disorder and should not be extrapolated to all bullies, and also note that the results should be verified by a larger study.

The results of the small study are published in

Using aggressiveness to gain something tangible such as social approval versus personal reward is an important distinction between a regular bully and someone with conduct disorder. Indeed, aggressiveness can be channeled constructively to allow a neurotypical person to excel later in life, in business or athletics, for example [ABC News].

Dr. Michael Eslea, a psychology professor, commented: "A better understanding of the biological basis of these things is good to have but the danger is it causes people to leap to biological solutions - drugs - rather than other behavioural solutions" [BBC News].

Related Content: DISCOVER: So, You Want to Be the Boss? DISCOVER: Violence, Genes, and Prejudice 80beats: Teenage Hoodlums Can Blame Bad Behavior on Hormones, Study Says

The SciencesShame and the Rise of the Social Media Outrage Machine