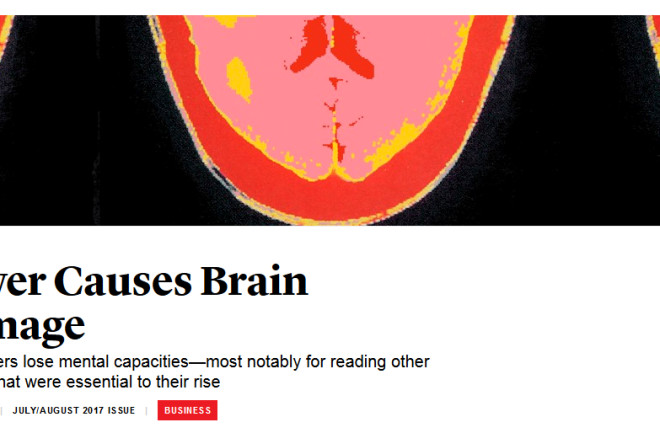 An Atlantic article from July 2017 has been widely discussed on Twitter over the past few days. It’s called Power Causes Brain Damage and I remember that it was fairly popular at the time of publication. Its recent revival was prompted I think by Harvey Weinstein’s arrest and more generally the abuses of power revealed by the #MeToo movement. The article itself, of course, dating to the pre-Fall of Weinstein era, isn’t specifically about this.

In my view, while power is certainly all too often abused, this article has very little to tell us about Weinstein, his fellow offenders, or other powerful people.

The piece, by Jerry Useem, centers around research on ‘power priming‘. In power priming experiments, participants (usually students) perform a task which is supposed to create a, perhaps unconscious, ‘feeling of power’. A typical method is to get them to write an essay recounting a past incident in which they held power.

Power-primed people, according to several studies, are prone to antisocial and egocentric behaviour:

Subjects under the influence of power, [researcher Dacher Keltner] found in studies spanning two decades, acted as if they had suffered a traumatic brain injury – becoming more impulsive, less risk-aware, and, crucially, less adept at seeing things from other people’s point of view…

Power priming even ‘anaesthetized’ the subconcious tendency to ‘mirror’ the observed actions of another person:

When we watch someone perform an action, the part of the brain we would use to do that same thing lights up in sympathetic response. It might be best understood as vicarious experience. It’s what [Sukhvinder Obhi] and his team were trying to activate when they had their subjects watch a video of someone’s hand squeezing a rubber ball.

For nonpowerful participants, mirroring worked fine: The neural pathways they would use to squeeze the ball themselves fired strongly. But the powerful group’s? Less so.

The piece concludes with a mention of David Owen’s notion of ‘hubris syndrome’ as proposed in his book In Sickness and in Power, which I reviewed in one of my earliest posts. I said the book “mixes sound history with fluffy speculation seemingly at random.”

So, there’s a few issues here. The low-hanging fruit for a critic of this article is that “Brain Damage” title. It’s a clickbait headline if ever I saw one. Authors don’t always write the headlines, so we shouldn’t blame Useem for this, but the title really is ‘brain-damagingly’ bad.

There is absolutely no evidence that power causes brain damage – all of the studies discussed in the article are about behavioral changes lasting minutes or an hour or so at most. Sure, we can speculate that these power-priming effects might become chronic in people with long-term power. But we could equally well predict that the effects would vanish once someone gets accustomed to feeling powerful.

Beyond the headline, the meat of Useem’s article is about power priming. Now, this is indeed an interesting and well-cited research literature. However, the article doesn’t mention that there is a major controversy within psychology over the validity of the entire field of priming studies like this, which are often grouped together as ‘social priming’.

Social priming has seen endless failed replications in the past few years, as regular readers will know. In terms of power priming specifically, there was a high-profile failure to replicate a power priming result in early 2017 and another earlier this year.

This aside, I’m not sure these power priming studies tell us much about the real world. Power priming is a psychology lab tool which is all about the feeling of power. In a lab context, that’s fine, but in the real world, the behavior of the powerful is influenced by something much harder to study in the lab: the reality of power.

Consider Harvey Weinstein. He didn’t just have a feeling of power, he actually had enormous power and influence over people’s lives and careers. This reality of power allowed him to do what he (‘allegedly’) did. I suspect that if you gave 100 random men a Weinstein level of power, a high proportion of them would abuse it – not because the sense of power made them less empathetic to their victims, but because the power let them get away with it. I don’t have experiments to prove this, because those experiments would be unethical – although see the Zimbardo study.

Overall, I don’t think power causes brain damage and I don’t think psychology lab experiments tell us much about the abuses of power in the real world (which is not to say they’re not interesting as research tools.)