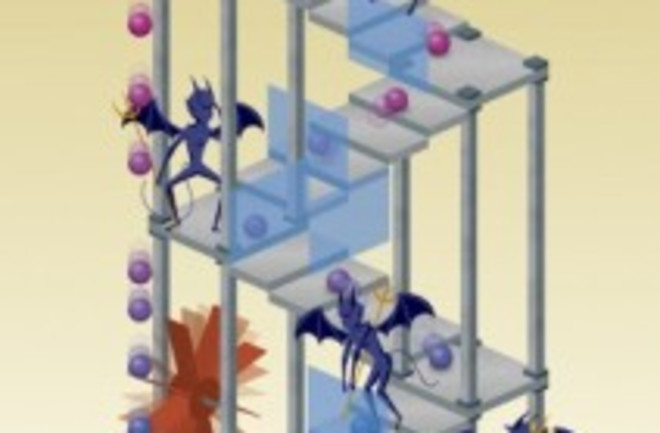 My teachers in grade school always said knowledge was power, but who knew they were being literal, if perhaps imprecise. Knowledge, it turns out, is energy, and it converts at a rate of 28 percent, according to Shoichi Toyabe, of Chuo University, and Masaki Sano, of the University of Tokyo. Their experiment has its origins back in 1871, when James Maxwell proposed a thought experiment: A demon controls the only door in a wall separating two sealed chambers filled with gas molecules. The demon allows only fast moving particles to enter one room, and only slow moving particles to enter the other room. After a while, one room has only fast moving particles, and the other has only slow moving particles. The system has lost entropy, but without expending any energy, creating a seeming violation of the second law of thermodynamics. Leo Szilard, a Hungarian physicist, offered a key insight into Maxwell's paradox in 1929: The demon had to expend energy measuring the speed of the molecules, thus the overall system of demon plus gas actually required work and the expenditure of energy. The demon used energy to take a measurement, creating information, preserving the second law, and establishing the idea that information could be converted to energy, and vice versa. Proving that idea in the lab took another eight decades. Now I'm going to confess that I'm in deep scientific waters here, probably well over my head, but this is how I understand Sano and Toyabe's experiment: They put a series of nano-scale beads into a solution. They then put a charge on the solution that induced the beads to rotate clockwise, or at least, to consume less energy turning clockwise than turning anticlockwise. Some writers have likened this to a staircase: it costs more energy to go up stairs than down. So in this case, clockwise is downstairs. But random molecules in the solution would occasionally strike he bead and cause it to turn anti-clockwise or go "upstairs" --- building up more potential energy. The scientists (or their doctoral student-lackey) would watch the rotation carefully --- whenever the ball turned anti-clockwise (go up stairs), they'd put a charge on it to prevent it from turning back (rolling down stairs), keeping it at a high potential energy. Then next time the bead randomly turned anti clockwise, they'd again prevent it from spinning back, building up yet more potential energy. In essence, they converted the knowledge of the direction of spin (information) into energy. (I actually find the diagram at top left to be more illuminating than all that clunky text, but I had to give it a go.) The experiments were precise enough to establish a conversation rate of 28 percent, information to energy. Not really enough to solve world energy problems, but enough to prove an interesting point: Knowledge may not be exactly power, but it sure is work.