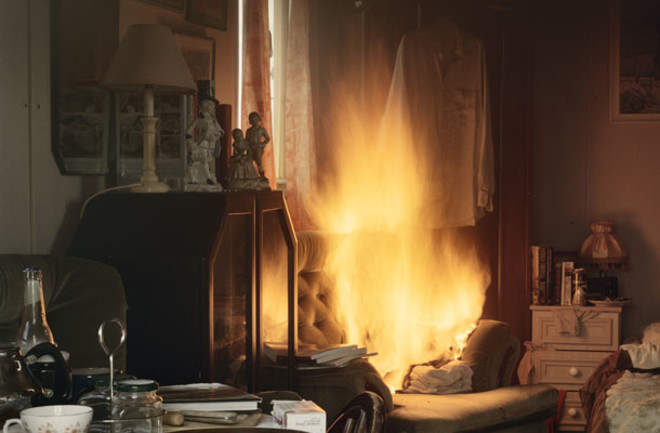 British photographer Sarah Pickering likes to see stuff burn. So much so that she melted some of her equipment while lingering overlong in the doorway of a burning room while shooting forensic fires at the Fire Service College in Gloucestershire. Sarah Pickering once considered becoming a forensics photographer, but quickly realized she didn’t have the stomach for it. Fortunately for us, Pickering explored her fascination through other routes. The first photo here was made at the Fire Service College and documents a forensics training exercise. The sets, called burn units, are meticulously constructed inside shipping containers, and planned according to a narrative that points to the cause of the conflagration. The fire investigators must uncover the cause afterwards, by clues left in the ashes. In the case of the first photograph here, the cause of the fire was a cigarette.

The following explosion photographs were made during “shopping trips” in Kent and Lincolnshire where bombs and other devices were set off for groups of potential buyers from the military and police. Sarah shot the explosions relatively slowly, at ¼ of a second. This allowed for recording the trajectory of the explosions, but meant that she had to rely on her intuition and experience to time the exposures to the silence following the countdown and before the blast.

All images here are from the new book of Sarah Pickering’s photographs from Aperture, “Explosions, Fires and Public Order." Sarah Pickering is also currently having an exhibit at the Museum of Contemporary Photography in Chicago.