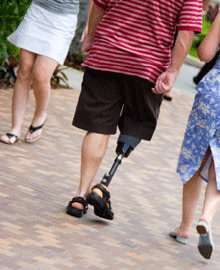 Phantom limb syndrome is an eerie condition, in which amputees have the physically painful sensation that

has shown that people can twist those ghostly limbs in anatomically impossible ways, while still feeling that the limb is real and present. In essence, each amputee's brain reshaped his understanding of where his body was.The findings show that the brain can alter how we perceive our bodies all by itself, without input from our senses [Reuters].

To corroborate that the individuals had really learned the new movement (after all, the scientists couldn’t see the phantom limbs) the researchers had them perform a task known as left-right hand judgement before and after their training. The ability to twist the phantom wrist in a new way allowed the participants to react to this task faster than they could before they had learned the impossible move [Science News].

The study, published in the Proceedings of the National Acadmey of Sciences, may lead to treatments that help alleviate the pain associated with phantom limb syndrome by helping patients learn to move their phantom limbs into a more comfortable position. The findings also

raise the "speculative, but not outrageous" possibility that patients could cope with movement problems due to stroke, back pain, or pain in other regions of the body, by being trained to change the image of that body part, according to the researchers [Reuters].