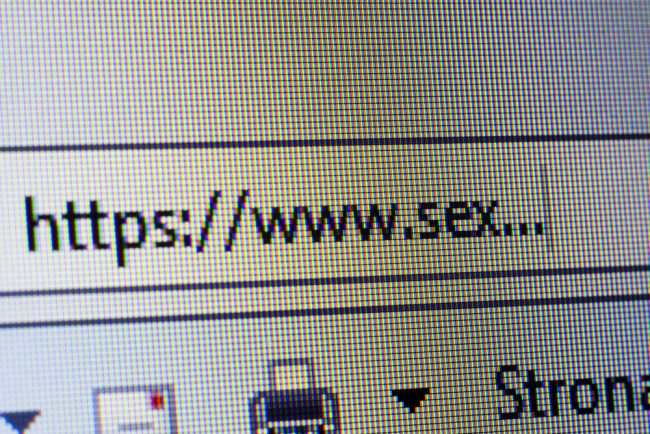 Strip club owners around the country are privy to a little secret: It’s better for business if your city hosts the Republican National Convention than if it hosts the Super Bowl. The New York Timesreported in 2012 that Republicans, on average, spend three times as much at strip clubs as Democrats at convention time. But is there something to this, or is this just political mudslinging? According to researchers who analyzed state-by-state Google searches, the evidence holds water. The highest volumes of Internet searches for sexual content were found in states where religion and conservatism were most prevalent.

The basic premise of this study harkens back to Sigmund Freud’s psychoanalytical theories. Basically, humans are born with natural sexual urges that we repress to get along peacefully in society. As the theory goes, the more people repress these urges in public, the more often they will indulge in them privately. Theories are all well and good, but researchers were looking for data to support this paradoxical claim. So, they tracked Google Trends in 2011 and 2012 to build a rough sketch of Americans’ private lives, measuring the volume of searches for a variety of explicit terms including “sex” and “XXX.” To measure religiosity and conservatism, researchers relied on two Gallup polls conducted in 2009 and 2011, each surveying over 350,000 adults across the United States. Researchers calculated a "religiosity index" for each state based on the number of people who said they were ‘‘very religious’’ or who "considered religion an important part of their daily lives." Political leanings were measured by the percentage of self-identified conservative individuals within each state.

Skeletons in the Closet 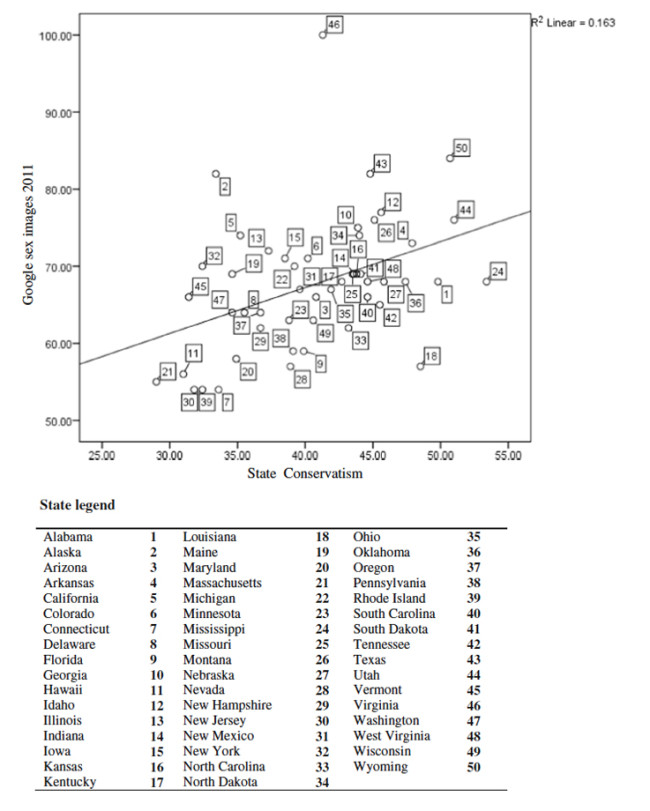 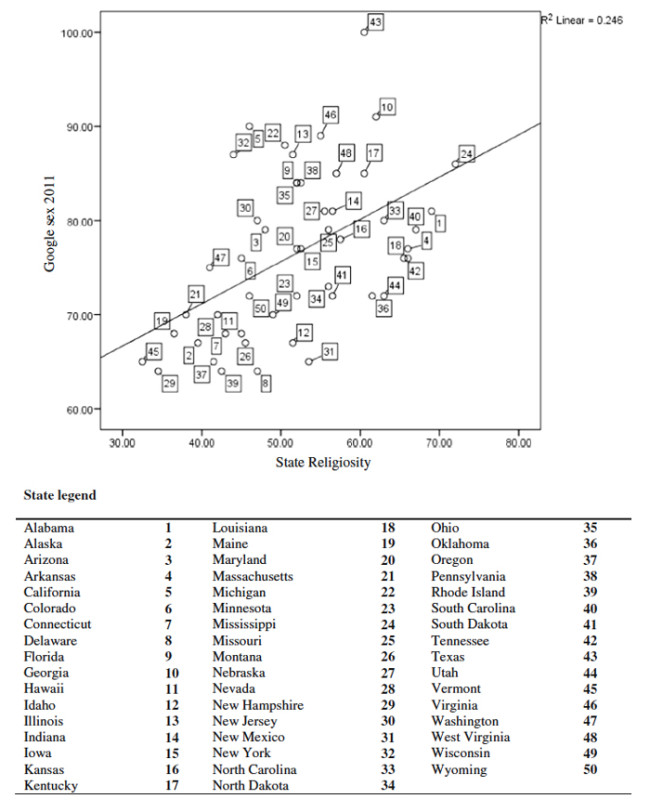 Scatterplot depicting the correlation between state-level religiosity and ‘‘sex’’ Google searching in 2011. (From: MacInnis, C. and Hodson G., Archives of Sexual Behavior, January 2015, Volume 44, Issue 1, pp 137-147) States like Georgia, Mississippi and Alabama scored high in religiosity and likewise in sex searches. Texas, the biggest outlier, had more sex searches than its religiosity would predict – but its conservatism makes up part of the explanation. States such as Vermont and New Hampshire were the least religious and searched for the least amount of sexual content. Researchers published their findings in the Archives of Sexual Behavior.

Let’s Not Jump to Conclusions

Of course, this being science, there are some caveats. Though researchers found statewide associations, at an individual level the study didn't show that religious individuals and/or conservatives were doing the searching. It could be that agnostic liberals are driven to seek out sex online since they live in an area where these urges are discouraged. However, researchers say their findings gel with firsthand accounts of club owners and sex workers in cities like Tampa Bay, which hosted the 2012 Republican National Convention. Thus, the study seems to support a well-known aspect of human nature: We don’t always practice what we preach.

MindGut Bacteria's Role in Anxiety and Depression: It’s Not Just In Your Head
Recommendations From Our Store