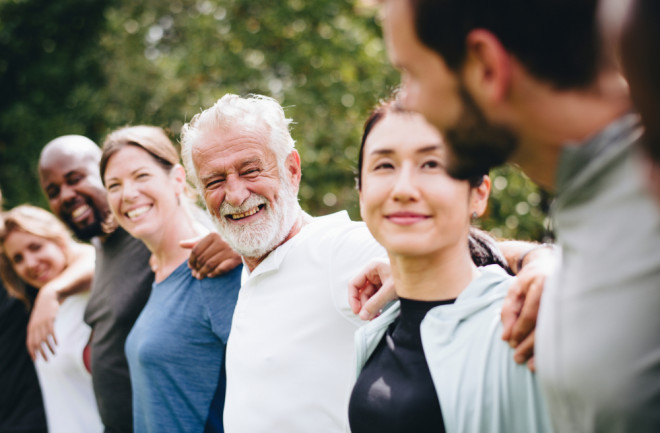 Imagine you are at a party, talking to someone you’ve never met. Underneath the smiles and polite small talk, you are subconsciously sizing-up whether this person is friend material. You might notice that they have a similar accent, facial features and fashion sense. You’ll even note their body odor, according to a new study.

Most animals rely on their sense of smell when interacting with others. And researchers in Israel speculated that it plays a role in human friendships, too.

“Humans are constantly sniffing ourselves and others, mostly without awareness,” says Noam Sobel, a professor of neuroscience at the Weizmann Institute of Science, who led the study.

Researchers hypothesized that sniffing strangers is yet another way to evaluate how much somebody resembles ourselves. “We become friends with people who are similar to us in the way they look or their values,” Sobel says. “But also similar in more surprising ways, such as patterns of brain activity.”

The study collected body odor samples from 20 pairs of “click friends,” or people who were immediately drawn to each other. A device called an electronic nose (eNose), which detects chemical similarities between samples, rated body odor from friends as significantly more similar than random pairs. To check whether people could sense this difference, the researchers brought in volunteer “smellers,” who confirmed the findings.

“But this still leaves open a big question regarding causality,” Sobel explains. For instance, friends may smell alike simply because of shared experiences. If two people bonded over their shared love of swimming and tinned mackerel, their shared stench would be a byproduct, rather than the cause of their friendship.

To confirm if similar smells played a role in initiating friendships, the researchers recruited a group of strangers and asked them to silently interact with each other. Afterwards, they gave them a questionnaire to evaluate how positively they perceived their partners. The eNose correctly predicted which pairs of people would get along best 73 percent of the time.

“We’re not suggesting that we’re just like dogs and we are basing our entire social interaction on our nose,” Sobel says. “But we are claiming that this factor does play a role in social interactions that we are mostly unaware of.”

Indeed, there is growing evidence that we are unconsciously sniffing out all sorts of information. Studies have shown, for example, that people can correctly distinguish the body odor of relatives from non-family members and can even guess the emotional states of others, based just on the scent of their sweat.

Brain imaging studies have revealed how our brain processes body odor differently to other smells. Blue cheese, for example, will activate olfactory areas in the brain, such as the orbitofrontal cortex. When you unconsciously smell another person, however, brain activity shifts to the emotional and attentional parts of the brain, suggesting that our brain processes smells from people and objects differently.

Different brain regions also activate depending on who you’re smelling. Smelling a friend’s body odor activates regions associated with familiarity whereas a stranger’s odor stimulates the amygdala, a part of the brain involved in the fear response.

The science of smell has received renewed attention in the past few years because of the COVID-19 pandemic. Experts estimate that up to three quarters of infected people experience anosmia, a temporary or permanent loss of smell, and around 5 percent of the general population are affected by the condition.

Anosmiacs cannot detect dangers like smoke and gas leaks, and cannot pick up on chemical cues that add to social interactions. They may miss “out on the subtle communication of emotions that takes place within a conversation,” writes Anna Blomkvist, who researches the social effects of olfaction at Stockholm University. “This may cause individuals with olfactory impairment to have more trouble understanding, empathizing and connecting with others.”

People with a poorer sense of smell may have smaller friendship groups, and anosmiacs may report more relationship problems. Likewise, people with autism spectrum disorder process social smells differently than their neurotypical peers.

Understanding the role of smell in social situations is important, because we could resolve social impairments with olfaction-based remedies, writes Sobel. For now, clearing our nostrils to resolve relationship problems remains an interesting idea. But potential anosmia treatments may add chemistry to people’s social lives.