Overcome Your Fears While You Sleep 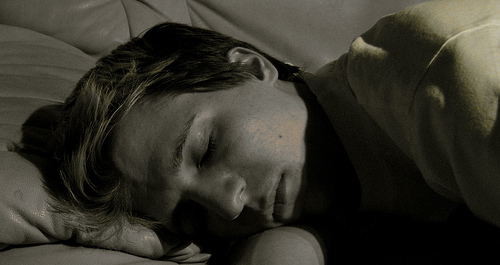 Nightmares aren't the only things that can haunt your slumber. Researchers can now trigger fears while you're sleeping---in order to help you overcome them. Neurologist Jay Gottfried, who authored the study, told the Washington Post

“Sleep sort of stamps memories in more strongly. That’s when a lot of memory formation can take place.”

To test this, the researchers showed pictures of two faces to 15 participants. With each face came a particular odor---new sneaker, lemon, clove, etc.---as well as a little electric shock. After repeating this conditioning, participants came to fear their particular face/smell/shock combos. Then the participants went to sleep. During their deep sleep period

, when memories are thought to be formed, the researchers repeatedly wafted one of the face-associated odors at each participant, to expose the unconscious brain to the fear stimulus.

Once awake, the participants showed less fear (measured by sweat and brain activity) at the sight of the face they "smelled" during the night, than the one whose scent they hadn't been exposed to during dreams. Study author Katherina Hauner told CBS News

"While this particular odorant was being presented during sleep, it was reactivating the memory of that face over and over again which is similar to the process of fear extinction during exposure therapy."

Exposure therapy works by having people face their fears, little by little, until they're no longer afraid. But for some people and some fears, even a little bit of exposure can be too much. Subconscious exposure to fear offers a potential way to get around this.

The researchers say their method

, published in Nature Neuroscience this week, could also work for preexisting fear by conditioning a person to associate a particular smell with that fear. That's good, if far-off, news for anyone with arachnophobia, trypophobia