Our anger faces are optimized to make us look stronger. 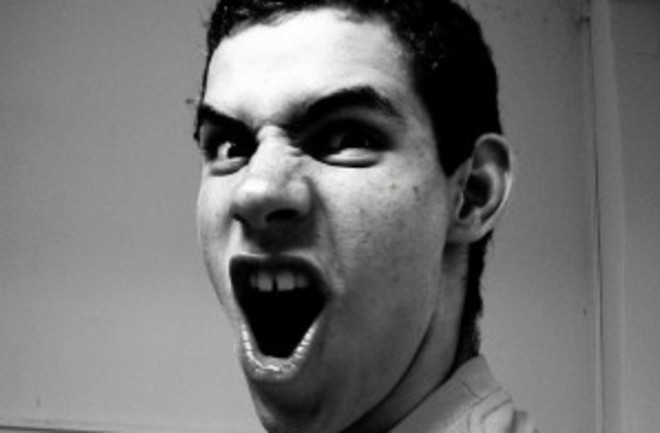 Photo: flickr/TastonFurrowed brow: check. Flared nostrils: check. Thinned lips: check. Have you ever noticed that we all look pretty much alike when we're angry? Obviously, this is because we activate the same sets of facial muscles. But why do we use those muscles in particular? Here, researchers hypothesize that humans have evolved such that the faces we make when we're angry also make us look stronger and more intimidating. To test this idea, they broke down the "anger face" into its constituent parts and manipulated facial expressions using one component at a time. They then had participants rate how strong they thought the person was. The result? The scientists were right: the same expression features that make up the "anger face" also make us look stronger. Which leaves us wondering whether Mr. T was actually strong--or just pissed off all the time. The human anger face evolved to enhance cues of strength. "Animals typically deploy their morphology during conflict to enhance competitors' assessments of their fighting ability (e.g. bared fangs, piloerection, dewlap inflation). Recent research has shown that humans assess others' fighting ability by monitoring cues of strength, and that the face itself contains such cues. We propose that the muscle movements that constitute the human facial expression of anger were selected because they increased others' assessments of the angry individual's strength, thereby increasing bargaining power. This runs contrary to the traditional theory that the anger face is an arbitrary set of features that evolved simply to signal aggressive intent. To test between these theories, the seven key muscle movements constituting the anger face were systematically manipulated one by one and in the absence of the others. Raters assessed faces containing any one of these muscle movements as physically stronger, supporting the hypothesis that the anger face evolved to enhance cues of strength." Related content: NCBI ROFL: Classifying dogs’ facial expressions from photographs. NCBI ROFL: Relationship of personalized jerseys and aggression in women's ice hockey. NCBI ROFL: Experimentally induced anger!