"Our results revealed characteristic patterns of brain activity associated with Gangnam Style". So say the authors of a new paper called 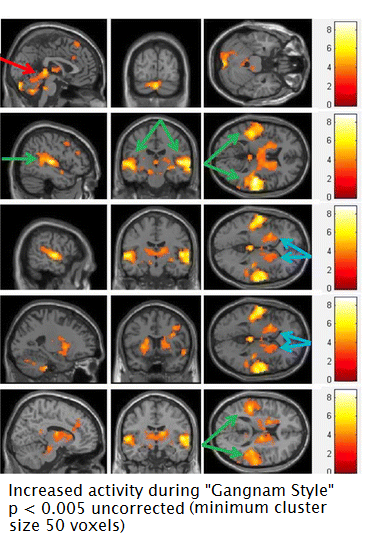 For one thing, only the temporal cortex blobs survive multiple comparisons correction (see their Table 1), but there's an even bigger problem: the stimuli are poorly matched. The two songs used differ in many fundamental ways: amongst other things, 'Gangnam Style' has lyrics while 'A Comme Amour' is purely instrumental, so any brain activation differences might reflect speech processing. Also, 'Gangnam Style' is one of the most famous songs of all time, while few people will have heard 'A Comme Amour' before, so the differences might reflect familiarity. Chen et al. do acknowledge these issues, but to my mind they are pretty big ones. Yet there's more. Chen et al. also conducted a PET study. Using the tracer 11C-NMSP they sought to see whether listening to "Gangnam Style" for about 45 minutes altered dopamine and serotonin receptor levels, compared to 45 minutes of 'A Comme Amour'. It turns out it did: "11C-NMSP binding was found significantly increased in the left superior temporal gyrus and left putamen, but decreased in the bilateral superior occipital cortices under Gangnam Style music condition". 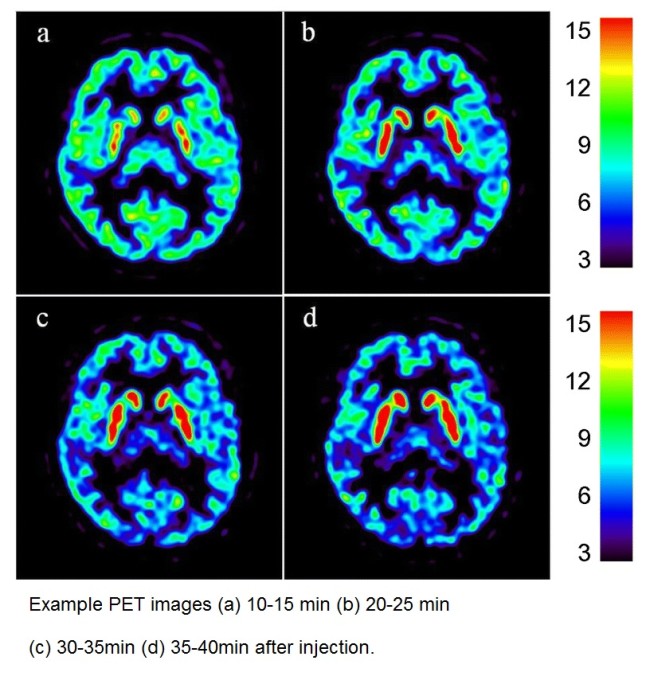 The authors interpret this as showing that Gangnam Style increases dopamine D2 receptor expression in the putamen, perhaps reflecting music-related pleasure. However all of the problems that affected the fMRI study also arise here, including the fact that, as far as I can see, none of the PET results survived multiple comparisons correction. Overall this paper is a bit worrying in my opinion. The fMRI study was, probably, a waste of money, and PET is even more expensive. Worse, PET involves the injection of a radioactive tracer which is believed to increase the risk of cancer. Now this risk is thought to be very small (of the order of 1/10,000 per PET scan) but even so, it's only ethical to expose volunteers to this risk if there is a scientific benefit to doing so, and I can't see the scientific value of this study. You know what I’m saying?