One Little Gene Could Explain Our Big Brains

Researchers find a gene — active only in humans — that drives neural development. 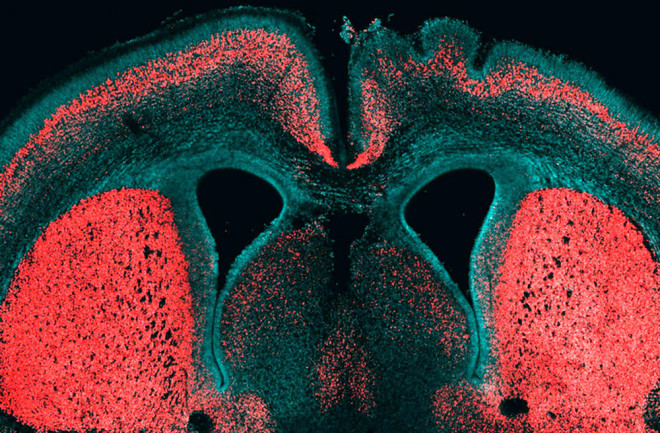 The human-specific gene ARHGAP11B is expressed only in the right half of this embryonic mouse cerebral cortex. The folded right side shows the increased surface area caused by introducing the gene, compared with the smooth left side. | Marta Florio and Wieland B. Huttner/Max Planck Institute of Molecular Cell Biology and Genetics

Our brains are triple the size of more primitive primates, thanks to our large neocortex. Packed with neurons, it regulates reason, cognition and language in ways that make us human. In February, German scientists identified a uniquely human gene that might have triggered our brain’s evolutionary expansion.

Neurobiologist Marta Florio and her team made the discovery while studying a type of neural stem cell that forms neurons when embryos develop. They knew this cell divides many times in humans but only once in mice. To find out why, they examined genes in both mice and humans that turned on during peak brain development and spotted a DNA snippet, ARHGAP11B, that was active only in humans. When they smuggled ARHGAP11B into mice embryos, the rodent’s neural development skyrocketed, indicating it was a growth driver.

The team found that ARHGAP11B was also present in Neanderthals and Denisovans, human cousins with similarly sized brains, but not in chimpanzees, with which we share 99 percent of our genome — further support for the idea that this gene could explain our unusually large human brains.