On DNA's Anniversary: How Rosalind Franklin Missed the Helix

Less than a year before Watson and Crick’s paper, "A Structure for Deoxyribose Nucleic Acid," was published in Nature, 60 years ago today, Rosalind Franklin sent around a hand-lettered obituary: 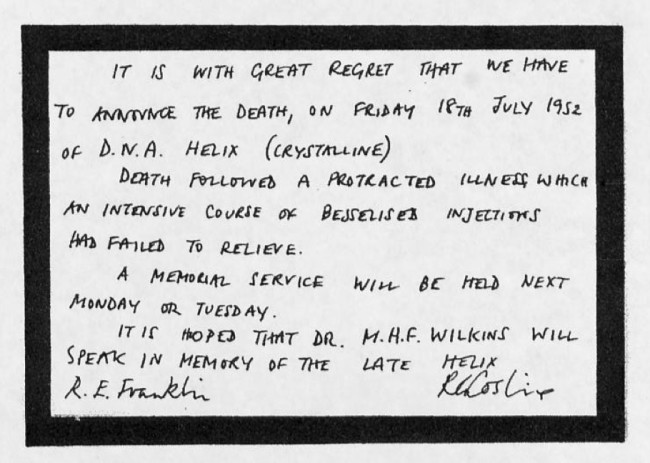 Obituary for the helix. Wellcome Library. Led astray by her own evidence, she had missed, just barely, making the greatest discovery in the history of biology: the coiled, interlaced structure that explained with such clarity the working of the gene. "The secret of life," Crick called it. Gosling, the other signatory, was Franklin’s assistant at King's College in London, and Wilkins was her boss and bête noire. “Besselised” refers to Bessel functions, a mathematical tool used to analyze the photographic images she so expertly produced of DNA. But the most significant word in her mocking postcard was the one in parentheses: crystalline. Several months earlier, having mastered better than anyone a technique called x-ray crystallography, she had taken the clearest pictures yet of the molecule. It came in two forms, depending on whether it was crystallized (shape A) or dissolved in water (shape B). It was the longer, stretched-out wet form, her Photo 51, that went on to become legendary. Horace Freeland Judson describes it in The Eighth Day of Creation:

The overall pattern was a huge blurry diamond. The top and bottom points of the diamond were capped by heavily exposed, dark arcs. From the bull's-eye, a striking arrangement of short, horizontal smears stepped out along the diagonals in the shape of an X or a maltese cross. The pattern shouted helix.

The question that has dogged historians ever since is why Franklin didn’t shout out the same. Instead she put image B aside, concentrating instead on the far less certain pattern in image A. No matter how hard she looked, she couldn’t see a helix there. 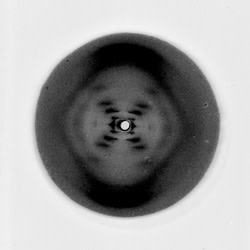 Franklin's Photo 51. Wellcome Library. She bristled when Crick, working with Watson at the Cavendish Laboratory in Cambridge, told her she was allowing herself to be misled by ambiguous markings and that both forms must be helical. But she couldn’t be persuaded. Cautious by nature, she believed in holding back on interpretation and grand theories until all the data were gathered and understood, the seeming contradictions resolved. Her style was to work from the bottom up, meticulously trying to piece together the big picture. She thought it was rash and premature that Crick and Watson, with their top-down approach, were enthusiastically building models -- castles in the air -- before they had laid the foundation. As they put together their sheet-metal and wire sculpture, the details, they believed, could be filled in along the way. By now Crick was already puzzling over what he saw as the next key issue: How are the nucleotide bases (what we now think of as the DNA letters) zipped together in pairs? He assumed it would be a matter of like with like -- that adenine would stick to adenine, thymine to thymine, cytosine to cytosine, guanine to guanine. Then a mathematician told him that his calculations showed the pairing was complementary: A-T, C-G. Crick also finally saw the significance of Chargaff ratios. In his analysis of nucleic acid, Erwin Chargaff at Columbia had shown that A and T and C and G exist in roughly the same proportions. Suddenly it all made sense: two interlocking helical templates forming a molecule that could carry information, and that could replicate. Over a span of about 40 pages, Judson explains the reasoning with a satisfying verve and turns the realizations and false leads into an absorbing drama. At first Watson had the helix inside out. Then he tried to cram together, like mismatched puzzle pieces, the wrong forms for the bases. In the final weeks before the discovery, another contender, Linus Pauling in Pasadena, had convinced himself that DNA was a triple helix. (Watson and Crick had been up that cul-de-sac before.) Meanwhile Franklin had become intent on proving that DNA -- the crystal, at least (it's not entirely clear what she was thinking) -- was shaped like a figure 8. All the while her image B remained on a shelf, in a filing cabinet -- wherever it was kept -- ignored month after month until Wilkins showed it to Watson, resulting in his famous epiphany. A few weeks later he and Crick had the structure. After negotiations between both labs, papers by Wilkins and by Franklin and Gosling appeared in the same issue of Nature along with the one by Watson and Crick. (They can all be found on a website at Nature, and an annotated version of the Watson-Crick paper is at the Exploratorium's site.) Toward the end of their paper, they flatly state that "We were not aware of the details of the results presented [by the King's scientists] when we devised our structure, which rests mainly though not entirely on published experimental data and stereochemical arguments." Yet they go on to write in an acknowledgment, three paragraphs later: "We have also been stimulated by a knowledge of the general nature of the unpublished experimental results and ideas of Dr. M. H. F. Wilkins, Dr. R. E. Franklin and their co-workers at King’s College, London." The sentences seem to contradict each other, and in any case Watson made a point, in his book The Double Helix, to describe the pivotal moment when he saw Photo 51. So the controversy continues. Was it ethical for Wilkins to show Watson his colleague's work without asking her first? Should she have been invited to be a coauthor on the historic paper? Watson hardly helped his case with his belittling comments about Franklin in The Double Helix. In Brenda Maddox's biography, Rosalind Franklin: The Dark Lady of DNA (it was Wilkins who called her that) she makes a strong argument that her subject knew all along that the B form of DNA was helical. But she didn't advertise the fact or begin to see the significance until shortly before Watson and Crick made their breakthrough. With a little more time she might have gotten the structure first. Or maybe Wilkins would have done so if Franklin hadn't left him with the impression that a helical structure had been ruled out. After the discovery was made, she figured out how the crystalline A form was just a foreshortened version of the B. Like so many things it was clear in retrospect. During the last week or so I've reread Judson's account of that year before the discovery and then the relevant pages in Maddox's biography and Robert Olby's detailed history, The Path to the Double Helix. There are many other wrinkles to the story -- the "gentlemen's agreement" by the Cavendish not to tread on King's turf, the role of Max Perutz as another conduit between the two laboratories. All of this was hashed out during the 50th anniversary in 2003 and it will be rehashed again for the 70th. That is how fascinating a story it is, revealing how human curiosity vies with human competitiveness in the unfolding of great science. Related posts:My Letter from Francis CrickThe Best Science Book Ever Written