Older fathers and the IQ of their children

From what people tell me IQ is a social construct which is totally controlled by environmental variables, and so is not of much interest. But curiously the other day when I looked at the hits on this website over the past 3+ years a huge number of highly accessed posts had to do with intelligence and IQ. In any case, seeing as how many readers of this weblog are having, or going to have, children at a relatively advanced age (in an evolutionary sense) I thought this post would be a good public service announcement. Below is a figure from a preprint posted on arXiv, The effect of paternal age on offspring intelligence and personality when controlling for paternal trait level (via Haldane's Sieve): 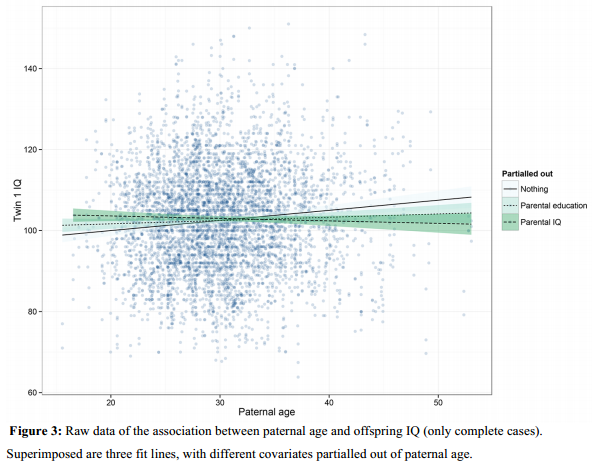 I'm assuming that there's initially an upward slope because more intelligent men tend to reproduce later (you can confirm this by looking at AGEKDBRN and WORDSUM variables in the GSS). Once you control for education and IQ the effect disappears. But there isn't a downward slope, which you might predict if the hypothesis of increased mutational load was valid. IQ is a high polygenic trait with variation controlled likely by thousands of genes, but one would presume that large effect de novo variants could change that architecture. As always, more data is welcome.