Anxiety disorders come in many shapes and sizes. Here’s what they have in common, and what sets them apart. 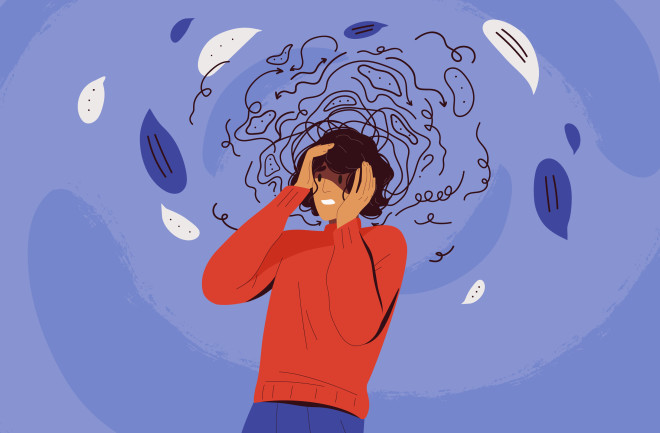 Oh, no. This is a story about anxiety disorders. But don’t panic: They make a lot of sense once you get to know them.

Anxiety disorders are incredibly common. About 1 in 3 people experience at least one anxiety disorder over the course of their lifetime. And more often than not, someone that suffers from one disorder will suffer from more than one.

Many mental disorders fall under the greater anxiety umbrella: phobias, social anxiety, PTSD, OCD, generalized anxiety disorder, panic disorder, agoraphobia and even childhood disorders like separation anxiety and selective mutism. These classifications come from the DSM — the Diagnostic and Statistical Manual of Mental Disorders. The DSM is considered the official authority on what’s what in the realm of psychology, and was last updated in 2013. Although there are diagnostics that allow clinicians to differentiate, say, social anxiety from agoraphobia, anxiety disorders share a common root.

“With anxiety disorders, there’s this over-active signal in the brain,” says Debra Kissen, clinical psychologist and CEO of the Light on Anxiety, a cognitive behavioral therapy (CBT) treatment center. “It’s saying, ‘oh no, something’s wrong,’ when most of the time things are OK.”

Why someone might develop one anxiety disorder and not another — or any anxiety disorder at all — is something researchers are still investigating. But experts are making progress learning how your genes and your environment interact to affect your mental health.

“Anxiety” is a broad term that encompasses not just generalized anxiety disorder, but also OCD, PTSD, panic attacks and more. The core varieties of anxiety, ranked by their prevalence in the population, are:

Most anxiety isn’t a disorder at all — anxiety is just fear about something that’s yet to come. Fear is adaptive; it’s what tells us to run away from the bad guy, to stay out of oncoming traffic or to step back from the slippery cliff’s edge. While fear is what we experience in these moments, anxiety is more anticipatory — it’s the worry, the uneasy apprehension felt ahead of time.

Evolutionarily speaking, it can be helpful to expect and prepare for something bad that’s on its way, or take steps to avoid a dangerous situation. But our brains have been a long time in the making, and the threats (or perceived threats) we experience in the modern world are very different from what our ancestors would’ve been up against. This leads to a lot of false alarms, says Kissen, who is also co-chair of the Anxiety & Depression Association of America’s public education committee.

“With anxiety disorders, it’s just overly trigger-happy,” says Kissen. “It’s good to have a hammer in a toolbox, but if every time there’s an issue we just keep hammering away, we’re going to start getting holes. The part of the brain that manages anxiety and fear can be really helpful — but when it’s overly utilized it can become problematic.”

Who will develop an anxiety disorder comes down to each person’s unique combination of genetics and environment, and how they shape how an individual reacts to modern stimuli. In the brain, the amygdala is the first responder, controlling emotional fear responses (warranted or not). Then the prefrontal cortex gets involved and thinks about those feelings, and determines how a person will act on them. This is where the planning happens: the worrying, the what ifs, the oh nos and the playing and replaying of past and future scenarios.

A person’s environment can shape their natural inclinations to feel fear and worry about it, too. Kissen gives an example of someone who grew up with parents overly obsessed with handwashing — a child wired for anxiety might grow into an adult extra anxious about germs.

Don’t panic if there’s anxiety in your family, though, says Kissen. “[Genes aren’t] the whole story, which is the good news,” she says. Sometimes people feel doomed by their parents’ anxiety, or worried they’ll pass their anxiety onto their children. “But there’s so much that we can do to rewire our brain. How we choose to live each moment is a moment to teach our brain something new.”

All anxiety disorders come down to an ineffective coping with a fear, especially when the behaviors a person is engaging in to cope — excess worry, excess safety behaviors, etc. — are hurting. What sets the different disorders apart is what that fear stimulus is (a past trauma, a specific phobia, general life) and what the response is (flashbacks, compulsive behaviors, excessive worrying).

These responses can be linked to specific brain areas, too, that interact with the amygdala and prefrontal cortex. For instance, PTSD also has associations with the hippocampus, the part of the brain responsible for memories. It’s why PTSD involves flashbacks and experiencing old emotions as if a traumatic event is currently occurring. OCD, likewise, involves the action centers of the brain. In response to a fear stimulus, the OCD brain says, “do something about this now.”

Luckily, the fact that these disorders share a common root means they can be mitigated by the same treatments, like cognitive behavioral therapy (CBT). CBT confronts both the anxious thoughts — the I can’t handle this, this is dangerous — as well as the behavior that comes with it. During CBT, a therapist works with the patient to confront the fear stimulus, bringing on sensations of anxiety to practice re-habituating the brain to handling them. In other words, the goal is to learn that it’s OK to feel anxious.

But stressed, Kissen explains, just means activated. Just like an athlete’s body is stressed during major training, stress itself isn’t a bad thing.

That said, some of the side effects of stress could aggravate an anxiety disorder — like coping with alcohol, favoring convenient unhealthy foods, not getting enough sleep or overall exhaustion.

So how can you tell if you’re super stressed or have an actual anxiety disorder? It comes down to how much it’s adversely affecting your life, says Kissen. “It’s not just that you’re stressed, but that it’s creating emotional distress. You feel awful, you feel like it’s too hard, you’re seeing impairment in some aspect of your key functioning.”

One challenge of anxiety is the anxiety-induced barrier to getting treatment. The anxiety itself affects how a person feels about the fact that they have anxiety. “It impacts how you feel about yourself. You might think ‘oh no something’s wrong with me, oh no I’m insane, oh no I’m deeply flawed.’ You’re looking at treatment through your anxiety lens, you have no way around that.”

Luckily, anxiety is the most treatable mental health condition out there. “And relief can come pretty rapidly as well, that’s why it’s really fun to work with. All of a sudden you see someone doing something they never thought they could do, and then just feeling such joy,” says Kissen. “There’s no reason to suffer.”