Obsessive Compulsive Sufferers May Find Relief With a "Brain Pacemaker" 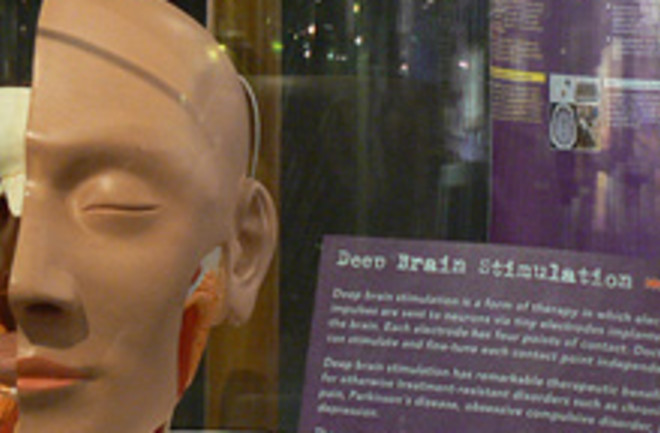 Deep brain stimulation can now be used to treat obsessive compulsive disorder, or OCD, which causes uncontrollable worries and anxiety in its sufferers. Medtronic's Reclaim deep-brain stimulation (DBS) device received approval from the Food and Drug Administration after a study of 26 patients with severe OCD that showed a 40 percent reduction in symptoms after a year of deep brain stimulation therapy. All the patients had tried and failed other therapies [Chicago Tribune]. The Reclaim device is implanted under the skin of the chest and then connected to four electrodes in the brain. The electrodes deliver steady pulses of electricity that block abnormal brain signals [AP]; the device is controlled by a battery-run component outside the body. Hooman Azmi, a neurosurgeon at Hackensack University Medical Center, said, "This is essentially like a pacemaker for the brain" [WebMD Health News].While the device has previously been used to treat Parkinson’s Disease and other movement disorders, this is the first time it will be used for a psychiatric condition. It is believed the electrical jolts will be delivered to parts of the brain that control mood and will thus be effective in relieving anxiety. Paul Stypulkowski, Medtronic's director of research, said, "What deep brain stimulation does is modulate those circuits that we believe are hyperactive in patients with obsessive compulsive disorder" [AP]. While deep brain stimulation therapy looks promising for people who have not found help elsewhere, it has been approved for use only as a last option, when other treatments have been ineffective. While about 2.2 million Americans have the disorder, the new device would only be available to a small group of patients who don't respond to other treatments, such as antidepressant drugs and therapy. The FDA approved the device under a program reserved for conditions that effect [sic] fewer than 4,000 people each year [AP]. Related Content: 80beats: For Treating Parkinson’s, A “Brain Pacemaker” Beats Out Medication DISCOVER: Could an Acid Trip Cure Your OCD?