No Surprise: Pot Messes With Memory. Surprise: It's Not by Affecting Neurons. 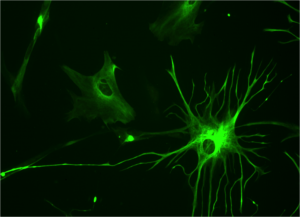 Human astrocyte. The vivid color is from GFP, not drugs.

What's the News: "Marijuana makes you forgetful," say most

this paper, but let's face it, that's not news

. That's the premise of every stoner comedy ever made. The real news is the importance of a type of brain cells called astroglia, which have long been ignored while researchers focus on neurons. THC

, the psychoactive chemical in marijuana, impairs working memory by connecting to astroglia, according to a new paper published in Cell

. So the star-shaped astroglia turn out to be the real star of this study. How the Heck:

From Glue to Glutamate: