There are windows of opportunity for learning while we sleep. 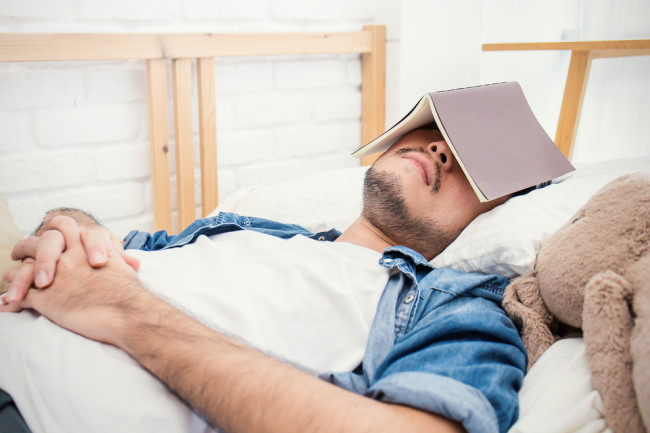 “Learn a new language while you sleep!” may sound like the start of a bad 3 a.m. infomercial, but new research has found some evidence for sleep learning. Of course, listening to French on tape while you sleep is unlikely to instantly give you the ability to order a vanilla latte and an omelet in a foreign tongue the next morning. But it may enhance your ability to learn new vocabulary, according to a study published in Current Biology.

Researchers have long known that sleeping plays an important role in the learning process. While we catch Z’s, our brains are busy organizing and consolidating the information and events we encountered that day. Important stuff gets filed away, while unimportant stuff gets deleted to make room for new learning. Yet scientists didn’t think it was possible to actually learn new things while we sleep. They thought our brains were too focused on the nightly housekeeping. But a new study from the Decoding Sleep Interfaculty Research Cooperation at the University of Bern, Switzerland, has shown that the brain’s channels for learning are also open during sleep.

“What we found in our study is that the sleeping brain can actually encode new information and store it for long term. Even more, the sleeping brain is able to make new associations,” said Marc Züst, co-first-author of the paper.

In the study, researchers examined whether people can form meaningful associations between foreign words and their translations while in slow-wave sleep, a stage when a person has little consciousness of their environment. German-speaking study participants slept to the sound of an audio recording that presented pairs of pseudowords representing a non-existent foreign language and their translations. The goal was to see if the words would leave some sort of trace in the patient’s memory, even if it was at an unconscious level.

When they woke up, participants were presented with the fake words again, but this time without their translations. Because participants didn’t know a recording was playing while they slept, they were unaware that their brains had heard some of the words before. Study participants were then asked to imagine the object the pseudoword denoted, and to guess whether it was smaller or larger than a shoebox — an approach that allowed researchers to tap into their unconscious memory.

“Implicit memory is hard to explicitly state. We had to access their unconscious, implicit knowledge through questions about semantic aspects of these new words,” Züst said.

Researchers found participants were able to correctly classify foreign words at an accuracy rate that was 10 percent higher than random chance, as long as they heard the word at precise times during slow wave sleep. The result suggests that the approach the researchers used causes the brain to form memory traces, or changes in the brain that help us store a memory.

“If you present ‘biktum’ and ‘bird’ to sleeping humans, their brains can make a new connection between the known concept ‘bird’ and the completely new and unknown word, ‘biktum,’” Züst said. “This sleep-formed memory trace endures into the following wakefulness and can influence how you react to ‘biktum’ even though you think you’ve never encountered that word before. It’s an implicit, unconscious form of memory – like a gut feeling.”

When a sleeping brain hears a word proved to be an important component in sleep learning. During slow wave sleep our brains alternate between “up states” and “down states” every half-second. During up states, the brain is highly active and interconnected — prime for learning.

“We looked how often we managed to hit these up-states with our word presentation, and what we found was that there is a clear dose-response curve: the more often you hit an up-state, the better the memory.”

In other words, people were more likely to correctly classify the words they heard during slow-wave peaks than the ones they heard during less-optimal periods of brain activity. To see what was happening inside the brain, a subgroup of participants performed the post-sleep memory test while being imaged with fMRI. As participants classified the new words they learned while sleeping, fMRI imaging showed that the language areas of the brain and hippocampus were activated.

It’s an indication that these structures allow for memory formation whether we’re awake or asleep, according to Züst.

In the future, there may be practical applications for the research that could help people with learning difficulties or attention deficits and older people experiencing cognitive decline.

“We currently don’t know if you can explicitly learn new information quicker during wakefulness if that information has already been presented during sleep. That is something we’ll look into in a future study,” Züst said.

For now, the study shows us that the concept of sleep learning may be more fact than fiction.

“I find it amazing that humans are capable of such sophisticated information processing without consciousness.”

Can You Learn How to Have a Lucid Dream?

Why Do We Dream? Science Offers a Few Possibilities