Edit: the PNAS paper discussed in this post has now been corrected.

A new paper in the prestigious journal PNAS contains a rather glaring blooper. The paper, from Oxford University researchers Eiluned Pearce et al., is about the relationship between genes and social behaviour. The blooper is right there in the abstract, which states that "three neuropeptides (β-endorphin, oxytocin, and dopamine) play particularly important roles" in human sociality. But dopamine is not a neuropeptide. Neither are serotonin or testosterone, but throughout the paper, Pearce et al. refer to dopamine, serotonin and testosterone as 'neuropeptides'. That's just wrong. A neuropeptide is a peptide active in the brain, and a peptide in turn is the term for a molecule composed of a short chain of amino acids. Neuropeptides include oxytocin, vasopressin, and endorphins - which do feature in the paper. But dopamine and serotonin aren't peptides, they're monoamines, and testosterone isn't either, it's a steroid. This isn't a matter of opinion, it's basic chemistry. 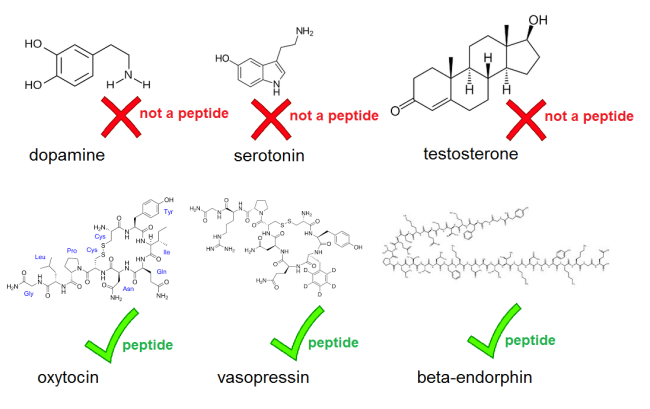 The error isn't just an isolated typo: 'neuropeptide' occurs 27 times in the paper, while the correct terms for the non-peptides are never used. I'm amazed that this snafu made it through peer review. It's a simple mistake; presumably whoever wrote the paper saw oxytocin and vasopressin referred to as "neuropeptides" and thought that the term was a generic one meaning "signalling molecule." That kind of mistake could happen to anyone, so we shouldn't be too harsh on the authors, but expert peer review is supposed to catch such issues. It clearly failed in this case.