Neurology and psychiatry are related fields – if for no other reason, because neurological disorders can often manifest as, and get misdiagnosed as, psychiatric ones. 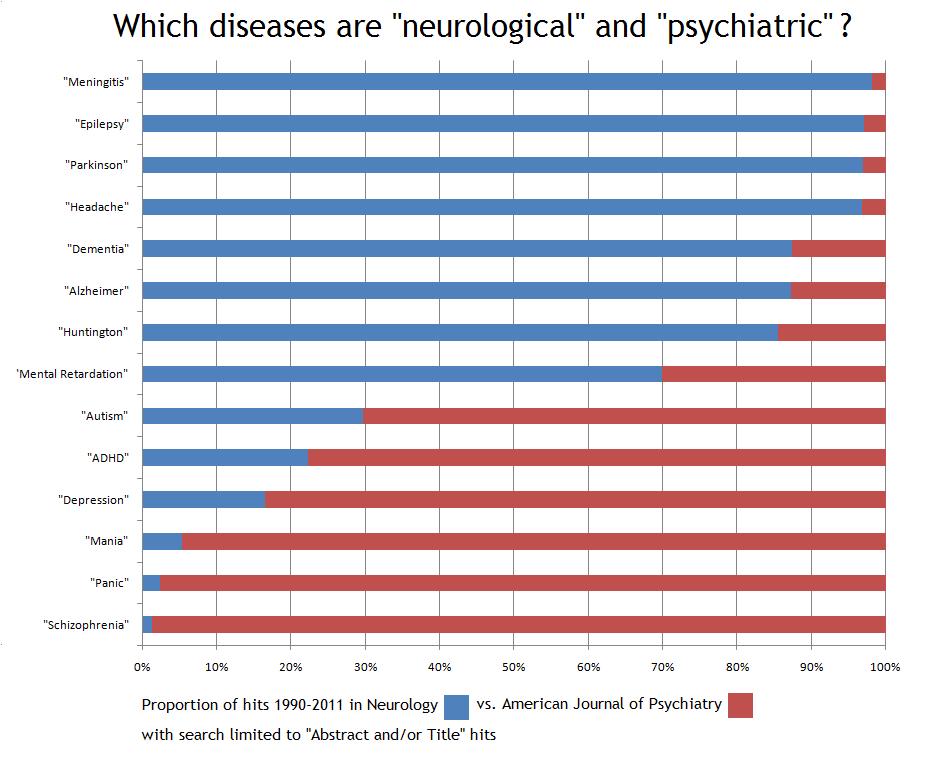 It’s a rather philosophical question and you could discuss it for as long as you wanted. Rather than doing that I thought I’d have a look to see which disorders are, at the moment, considered to fall into each category.

To do this I did a quick search the archives of two journals, Neurology which the world’s leading journal of… well, guess, and the American Journal of Psychiatry. I looked to see how many papers from the past 20 years had either a Title or an Abstract which referred to various different diseases. You can see the results above. Note that the total number of papers varied, obviously, and I’ve only plotted the proportion.

Some interesting results. Schizophrenia, which is probably considered “the most neurological” psychiatric disorder, is in fact the least talked about in Neurology. Depression is top amongst the “core” psychiatric ones.

Autism occupies a middle ground, discussed by psychiatrists at 70% and neurologists at 30%. That didn’t surprise me, but what did was that ADHD is almost as neurological as autism. Mental retardation is also intermediate, though it’s 30:70 in favour of neurology. Whether autism is really less neurological than mental retardation, is a good question.

Then out of the disorders with a known neuropathology, Alzheimer’s disease, Huntington’s disease and “dementia” (which overlaps with Alzheimer’s) are a bit psychiatric while stuff like headache and epilepsy is almost 100% neurological. Why this is, is not entirely clear, since both dementia and epilepsy are caused by neurological damage, and they can both cause “psychiatric” symptoms.

I suspect the difference is that it’s just much harder to treat Alzheimer’s, Huntington’s and dementia. With epilepsy or meningitis, neurologists have a very good chance of controlling the symptoms and few patients will be left with ongoing psychiatric problems. But with the neurodegenerative disorders, neurologists can’t really do much, leaving a large pool of people for psychiatrists to study.

Someone once said that neurologists take all of the curable diseases and leave psychiatrists with the ones they can’t help. These figures suggest that there may be some truth in this.