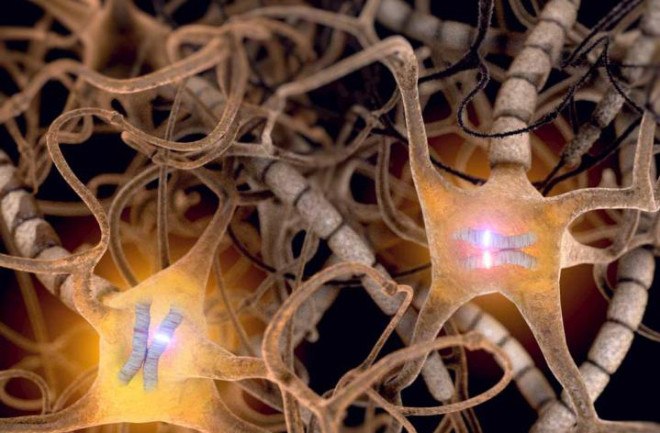 (Credit: Gregg Lab) We’re all the product of genes from both parents. But in the brain, neurons may favor genes from mom or dad far more than previously thought, which is an effect that could impact one's risk for mental disorders. Everybody generally receives two versions, or alleles, of each gene, one from each parent. The fact that each person has a spare copy of a gene in case the other is defective is one reason why scientists think sex evolved in the first place, says study senior author Christopher Gregg, a neurogeneticist at the New York Stem Cell Foundation and at the University of Utah School of Medicine in Salt Lake City. But for more than a century, scientists have thought alleles from both parents are roughly equally active throughout life for most genes. Still, researchers have known for decades that some genes act differently. For instance, an effect known as imprinting always silences either the mother's or father's copy of about 1 percent of all genes in mammals. In sheep, imprinting can silence the mother's version of the gene CLPG1, leading to offspring that are "callipyge" (Greek for "beautiful buttocks") —that is, they have unusually big, muscular bottoms. "It is thought that an evolutionary conflict between mothers and fathers over the traits their offspring display leads to imprinting," Gregg says. In addition, although female mammals typically possess two X chromosomes, one is generally randomly inactivated in each of their cells across their entire bodies. This phenomenon, among other things, accounts for the mottled coats of nearly all calico and tortoiseshell cats. Now Gregg and his colleagues find that throughout rodent bodies, one parent's copy of a gene is often randomly turned off while the other remains active. Surprisingly, this phenomenon was seen most often in the developing brain, influencing nearly 90 percent of the more than 13,000 genes examined in five-day-old mice. The researchers also saw this effect in the brains of monkeys, known as cynomolgus macaques, that often stand in for humans in lab experiments. Some of the genes affected in these primates are linked to mental disorders in humans, "which could be important for understanding the causes of autism, depression, Huntington's disease and other brain disorders," Gregg says. Gradually, as brains mature, the scientists found that neurons increasingly expressed both parents' alleles equally. Still, in the adult brain, for at least 10 percent of the genes examined, alleles still got randomly inactivated. The scientists detailed their findings online Thursday in the journal Neuron. It remains a mystery why this occurs, but the answer may lay in how stretches of DNA, known as enhancers, help control the activity of genes. Enhancers work by twisting and folding to come into contact with bits of DNA to help them switch on genes. Two alleles can sometimes compete for access to the same enhancer, and this struggle could lead just one allele to be active at any time, Gregg explains. Imagine two alleles as people in an elevator competing to push the same button. Perhaps early in development, genes may be more active, and just one allele consistently presses the button. In later stages of development, genetic activity may settle down, and both alleles consistently share the button. "However, at this stage, we don't know if this picture is true," Gregg says. The scientists are now exploring whether the effects they uncovered could help shed light on brain disorders such as autism and schizophrenia. Often mutations linked with mental disorders impact just one allele, and these findings reveal that in the brain, "some cells will predominantly express the mutated allele, while other cells will express the healthy allele, and some cells express both," potentially helping explain variations seen with these disorders, Gregg says. The researchers added that "it might possible to switch on silent healthy alleles in these brain cells," Gregg says. This might in turn help treat mental disorders. It remains uncertain what further implications, if any, these findings might have for behavior. "It is feasible that some individuals could by chance choose more of, say, their mother's alleles than their father's in a particular circuit of a brain," Gregg says. "Whether that could shape their behavior in a meaningful way — say, whether it makes them more similar to their mothers — is a provocative idea that warrants testing, and is testable." Future research will also explore how stable these effects are. "We want to know which effects are stable for hours, which are stable for days, and which are permanent," Gregg says. "The functional impact of these effects on brain genetics will be influenced by how stable they are."